This year’s CHIO Aachen partner country got off to a successful start!

Thanks to Olivier Robert the French flag was the first to fly over the Aachen Soers in the Main Stadium after the STAWAG Opening Jumping competition.

He hadn’t actually set out to win, Robert reported after the last notes of the French national anthem had rung out in the Soers. “But, of course I am absolutely delighted! “He added that he didn’t realise he had been that fast, but then admitted. “But the mare has a lot of thoroughbred in her.” And as everyone knows, that is normally accompanied by a scopey canter stride.

Second place went to the USA, Laura Kraut with her just 8-year-old Selle Français stallion, Berdenn de Kergane, they crossed the finish line in a time of 68.28 seconds. The Quaprice Bois Margot son impressed the crowd with his huge scope, which indicated that 1.45 metre fences are certainly not the limit for him.

The mare that finished third still has her whole future ahead of her too: Marcus Ehning’s eleven-year-old Calanda by Calido. She is well-familiar with the Soers, she namely won the Final of the Youngsters Tour here in 2016 – as an eight-year-old. It hadn’t been Marcus Ehning aim to come under the top ten either. “Many of the riders used this course as a training round. But the mare is fast by nature!” Which meant he could play it cool and still managed to reach the finish line in a speedy time: 70.27 seconds.

Even if Calanda is acquainted with the Soers, it is going to be her first year in the Big Tour. Ehning’s championship horse, Pret a Tout, whom he won the Grand Prix of Aachen with last year, is currently taking a break from competitions, he has actually started training again, but is not yet back in top form for Aachen. So, Marcus Ehning has brought Calanda, Cristy and Funky Fred with him to Aachen for the demanding classes. Ehning doesn’t doubt that Calanda has plenty of potential: “She is a horse that offers all possibilities. But her temperament makes her rather difficult to handle.” The mare is very sensitive and spooky, is how Ehning described her. But the good thing is that she is always totally focused when jumping.

This leaves the rider, who won team bronze at the World Equestrian Games in Tryon, optimistic regarding the next few days. It is Ehning’s 22nd year at the Soers. It is therefore not surprising that he says: “It is a bit like my home here…“ 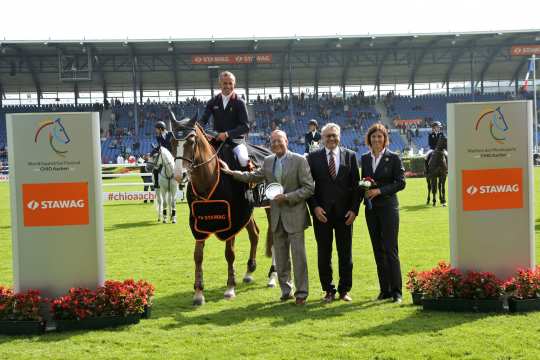 Congratulations to the winner from the STAWAG board Christian Becker and Wilfried Ullrich and ALRV Supervisory Board member Stefanie Peters.