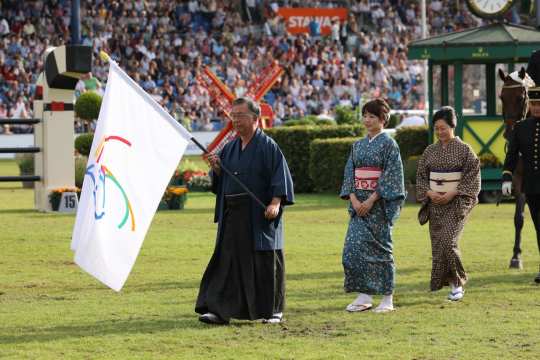 The presentation of the partner country 2020 at the CHIO Aachen 2019.

The partner countries enjoy a long tradition at the World Equestrian Festival, CHIO Aachen. They bring a special atmosphere to the CHIO Aachen since 2001.

Breath-taking landscapes, rich tradition, high-speed trains, temples and pop culture: Japan has many facets. A great deal of which can be experienced at the World Equestrian Festival, CHIO Aachen 2020 – especially during the Opening Ceremony on the evening of June 2nd, 2020.

Of course, the focus of attention is on the 2020 Olympic Games in Tokyo.  “The Olympics will play a dominating role in the Opening Ceremony – cheerful, colourful and sporty”, commented Frank Kemperman, Chairman of the Aachen-Laurensberger Rennverein e.V. (ALRV), organisers of the event.

From Japan, among others, a 130-man strong marching band and mounted archers will be taking part. In addition to a traditional group the archers – “Yabusame” – are also sending over a modern “Ladies Group”. The visitors can look forward to plenty of music, including not only the “Taiko Drums”, but also to a traditional, Japanese sound, the “Shamisen”. Japanese tradition will play a major role, the spectacular cherry blossom will be portrayed as well as Japanese pop culture with manga and cosplay.

Japan will also be highly present in the CHIO-Village with its own zone, among others the guests from the Far East will present their traditional tea ceremony and a kimono exhibition. Tickets for the opening pageant (June 2nd, 2020, 8 p.m.) are available online or from the ticket hotline on: +49-(0)-241-917-1111.

Whether you want a seat, standing room or a season ticket – you will find what you are looking for here. Select the tickets that suit your requirements and needs from among our diversified offer. You can also use our 3D ticket service for this purpose!

Get your tickets now

OF THE PAST PARTNER COUNTRIES