First-class competition sport – that is what has distinguished the CHIO Aachen for years. The World Equestrian Festival wouldn’t be what it is without its special kinship to the sport, gripping emotions and the unique flair. Hundreds of thousands of visitors come to the Soers year after year, because they share a passion – and want to spend an unforgettable time here.  So, the supporting programme is a significant part of the event. A thrilling show programme is integrated into the 10 days of top-class equestrian sport, which offers diversity and goose bump moments. The CHIO Aachen is more than an equestrian show!

The “Horse & Symphony” concert at the CHIO Aachen 2022 promises to be an exceptional experience.

The “Horse & Symphony” concert at the CHIO Aachen 2022 promises to be an exceptional experience.

-included in the ticket “Jumping Tuesday”-

A tradition since 1953: The emotional closing ceremony of the CHIO Aachen. Accompanied by the sounds of the German folk song "Muss I denn" and waving with white handkerchieves, participants and spectators say good-bye to each other.

Closing ceremony in the main stadium

-included in the ticket “Jumping Sunday”-

The most extraordinary concert of the year: Symphony Orchestra Aachen meets top class show programme in the Deutsche Bank Stadium. 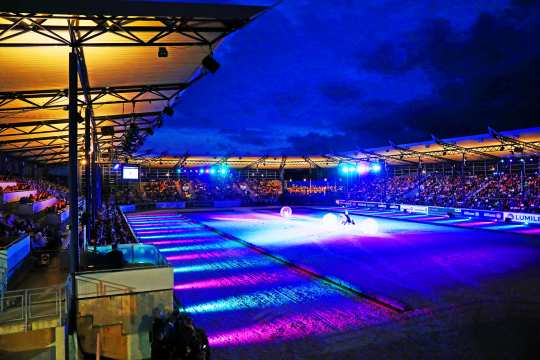 The people from Aachen and their guests from the entire region meet up at the Soers for the “Open Day”, for which there is no admission charge. An action-packed show programme, a festive ecumenical church service in the Deutsche Bank Stadium and an entertaining supporting programme for families  with many exciting offers turns the day into an enjoyable prelude to the second week of the event. 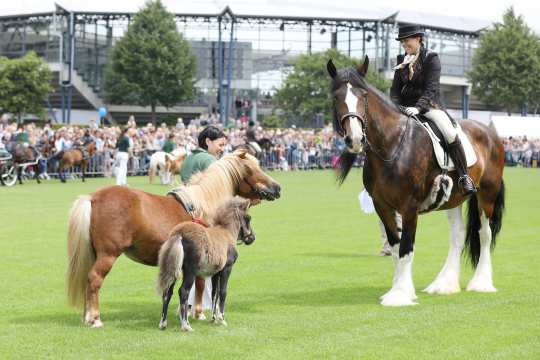 State studs meet the rising sun: The CHIO Aachen Opening Ceremony on Tuesday, September 14th, is going to be exceptional. Over 200 horses and almost 600 players promise an extravaganza in a class of its own. Everything revolves around this year’s partner country Japan, the German state studs and the excitement at finally being able to enjoy live experiences again.

This year’s CHIO partner country Japan will be presented in all its glory. A magnificent cherry blossom installation awaits the visitors in the Main Stadium together with the Taiko Drum groups “Wagaku” and “Miyabi”. The flamboyant and pot-bellied drummers predominantly had a religious significance in Japanese history, however, the drummers have long since been impressing the crowds at big shows. The pageant will be further enhanced by dance choreographies, traditional Japanese riders like the “Yabusame” mounted archers and much more from the partner country Japan. In addition to Japan, the Opening Ceremony will be shaped by the German, state studs. A herd of Arabian horses is also travelling to the Soers and a quadrille comprising of 50 stallions will be a further highlight. Many of the Olympic medallists from Tokyo will also be in action and the end of the Opening Ceremony is going to be spectacular. 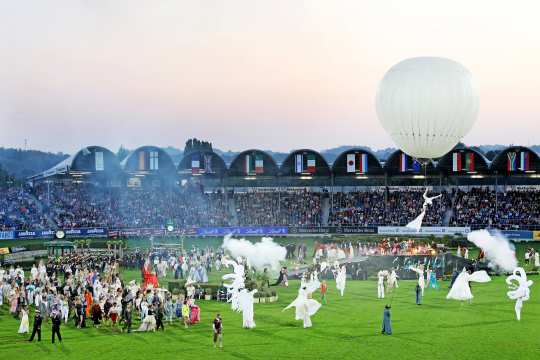 A spectacular show: The opening ceremony 2019.

The emotional closing ceremony of the CHIO Aachen

A tradition since 1953: Accompanied by the sounds of the German folk song “Muss I denn” and waving with white handkerchieves, participants and spectators say good-bye to each other. 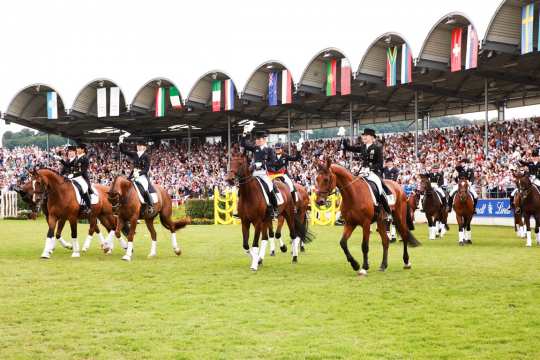 Farewell to the Nations.