From flat and hurdle racing to the CHIO Aachen

“I saved for three years, so that I could come to Aachen again this year.” Of course, it is not quite as extreme for the riders and drivers today, as it was for the Hungarian-born Tibor von Pettko-Szandtner in 1952 – at least not financially speaking. From the sporting aspect on the other hand, you have to really prove your ability to be invited to the World Equestrian Festival, CHIO Aachen. It is indeed the international equestrian elite, who compete in the show-jumping dressage and driving competitions at the show grounds of the Aachen-Laurensberger Rennverein (ALRV) every year. 2007 the tournament was eventually enlarged: Now eventing and vaulting belong to the CHIO-disciplines. And even World and European Equestrian Championships are just as symbolic of Aachen as Emperor Charles the Great, printen (Aachen biscuit speciality), or the football players of Alemannia. A city that awakes emotions.

“He has achieved enough. I just brought him back one more time, so that he can say a last goodbye to Aachen,” Fritz Thiedemann said emotionally for instance after the last public performance of his legendary jumping horse, Meteor in 1961. Referring to the enthusiastic crowd that emanates a more than electric atmosphere just as much today as it did then. “Aachen stands for top sport – but also and above all for a folk festival,” says ALRV President Stefanie Peters.  Of course, one could not possibly have foreseen this development in 1898 when the squires, factory owners, land owners, cattle traders and riding instructors from the region joined up forces to form the “Laurensberger Rennverein”. Their intention was quite simple: Jointly organised horse races were designed to liven up the everyday life of the equestrian-loving people of Aachen.  Whereby the historical footsteps that they wanted to ride into were immense even at this early date, since under the patronship of Charles the Great, riders had already competed against each other in the field one thousand years before. A tradition, which meant that Aachen had the reputation of a being “horse Mecca” up until the 19th Century.

After the initial years of its establishment, the club that had been renamed “Aachen-Laurensberger Rennverein” moved to its present location site in the 1920s: To the extensive show grounds at the Soers in Aachen. As well as the usual “racing day” the first so-called “riding and driving tournament” was staged in 1924 combined with flat and hurdle races. Twenty thousand spectators were enthralled and the foundation stone for the CHIO had been laid.  From then on, the developments raced ahead: In 1927 the first international tournament was held and two years later the first Nations’ Cup and thus the actual era of the CHIO (Concours Hippique International Officiel) began. In 1938 120,000 guests from all over Europe travelled to the Soers and their riders competed against each other in 50 competitions with 600 horses.

The war meant that things came to a halt, but it wasn’t the end of the tournament. The flags of the former German opponents Great Britain, the USA and the Netherlands were already flying again in the equestrian stadium in 1947. Sport as a basis of understanding among the different folks – and the break-through into a new era. Fritz Thiedemann, Hans Günter Winkler, the Schockemöhles, the d’Inzeos or Nick Skelton; Dr Reiner Klimke, Josef Neckermann, Liselott Linsenhoff, Elena Petushkova or Nadine Capellmann and Isabell Werth;  Richard Talbot, Ijsbrand Chardon or Michael Freund. These are the names that were to write equestrian history in Aachen in the following decades. Sportsmen and women who together with their horses were able to celebrate spectacular victories and occasionally had to accept bitter disappointments. At the World Equestrian Festival, at World Championships (Show-jumping: 1955, 1956, 1978 and 1986; Dressage in 1970) and European Championships (Show-jumping: 1958, 1961, 1965, 1971; Dressage 1967, 1973, 1983). Looking back the legendary German show-jumper Hans Günter Winkler says today, “Aachen was my equestrian homeland. I was lucky enough to be able to achieve great victories there. And for me it was the crowning finale being able to end my career in front of 50,000 spectators at the 1986 World Championships at the Soers.”

The place where the crowd really live for the sport, more than they do anywhere else. “You have the impression when you meet inhabitants from Aachen, that they are all purely there for the tournament, whether it be the customs offices or the hairdressers. “You have to compete in Aachen if you ride, and you have to take part in Aachen as often as possible, if you want to continue riding,” the US trainer Bertalan de Nemethy realised already in the 1960s. And so more and more spectators come every year – it was over 336,000 in 2005, and they always include the crowned and uncrowned heads of the high society: Kings and Presidents, church delegates, international sport and media celebrities as well as the stars or the upcoming stars of show business. The CHIO has already been considered to be the most famous riding tournament in the world for some time.

A tradition that brings obligations with it: From 2004 to 2006 the show grounds were completely renovated and put into shape for the World Equestrian Games in seven disciplines – show-jumping, dressage, driving, eventing, vaulting, endurance and reining – in the year 2006 from August 20th – September 3rd. For the first time in Germany all competition locations on the showgrounds were easily accessible by foot. This was a sporting event of superlatives: Almost 800 athletes and their horses competing for 16 gold medals – and 576.000 visitors and 1,6 billion television viewers shared the excitement. “It was simply sensational. This overwhelming atmosphere reached not only fans of equestrian sport but many other people as well. These World Championships have achieved a lot for the equestrian sport.” says no one less than Ludger Beerbaum, one of the most successful showjumpers of all time. In 2015 the next exceptional chapter of equestrian sport was written in Aachen by hosting the FEI European Championships in five disciplines.

By organizing such extraordinary championships, the CHIO Aachen always benefits as well – even more increased media attention or further development of the renowned showgrounds in the Aachen Soers are some of the effects.

And so, sport history will be written once again in 2021 at the most famous equestrian sport showgrounds in the world.

The “History Tour” allows the visitors to inform themselves about the building history of the Aachen-Laurensberger Rennverein (ALRV) with the aid of twelve information boards, which are located in prominent places throughout the CHIO grounds. For example the History Tour leads past the Main Stadium, the Soers cross-country course, the Deutsche Bank Stadium and the stables, thus accompanying the visitors on an exciting journey into the past of the ALRV. The development of the buildings and infrastructure on the CHIO grounds – the History Tour arouses the curiosity of the visitors and leaves no questions unanswered. Additional photos and illustrations on the information boards – from the founding years through to the present day – appear to bring “the old days“ back to life again. 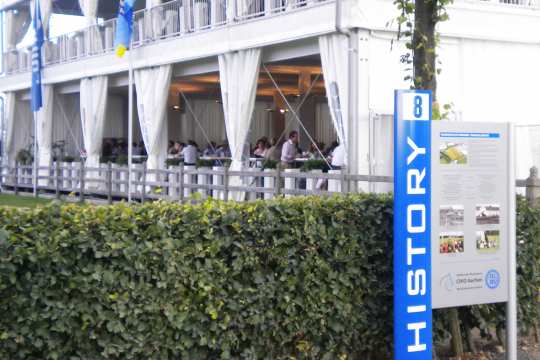 The History Tour covers 12 stations which allow you to discover the development of the World Equestrian Festival, CHIO Aachen, from the very beginning until today. The information boards are spread all over the showground and lead you through a journey through time with exciting facts and photos.

A star for every wonder horse

There’s a touch of Hollywood at the Soers: The CHIO Aachen has its own “Walk of Fame”. And would one expect anything else in Aachen? It is of course the names of horses that shine underneath the stars.

Not a footprint, but instead a horseshoe belonging to the respective four-legged superstar is embedded inside the star. They include names of jumping, eventing and dressage horses, all of whom have either won the Deutsche Bank Prize, the SAP-CUP or the Rolex Grand Prix.

The “Walk of Fame” can be found on the showgrounds, right next to the entrance of the CHIO Aachen offices.

Prize of the city of Aachen

The Prize of the City of Aachen is awarded to personalities who have rendered outstanding services to the CHIO Aachen.

The Soers as Garden of the Horses, as a green Oasis.

We would be very glad if you would support our project “Garden Eden”. By this, we will be able to create a place of tranquillity and peace, also in the interest of our children.

Donate an opional amount of money which we will then use to plant roses and hedges. Or become the “sponsor” for a tree (€ 1.300,–) in the “Alley of 100 Trees”. Of course you will receive a deductible contribution receipt for each end every donation.

Do you have any questions? Then please contact info@chioaachen.de 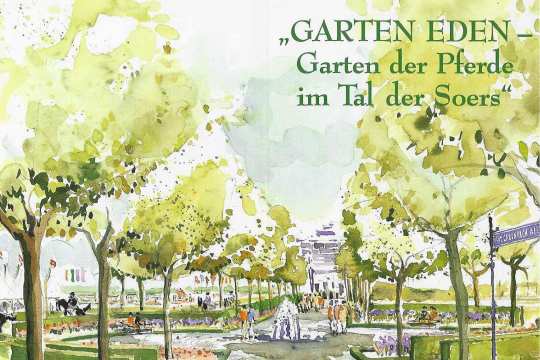 Become "sponsor" for a tree on the CHIO Aachen show grounds.