In 2017, Torben Jacobs and Theresa-Sophie Bresch performed as Bonnie and Clyde in the Pas de Deux at the CHIO Aachen. This year they transformed the Albert-Vahle Arena into a bull-fighting ring and danced to victory with the paso doble.

The applause started before Theresa-Sophie Bresch and Torben Jacobs had even completed the final exercise of their freestyle on Danny Boy lunged by Alexandra Knauf. “We had primarily set ourselves the aim of heating the atmosphere up in the hall,” the two of them reported afterwards. One can safely say: They definitely succeeded in doing so! The pair celebrated all of the extremely difficult exercises of their routine to the electrifying Spanish rhythms that they describe to be a combination between the paso doble and bull-fighting. The reward: A score of 9.066 for today’s performance. Second place went to last year’s winners from Italy, Silvia Stopazzini and Lorenzo Lupacchini on Rosenstolz lunged by Laura Carnabuci. Jolina Ossenberg-Engels and Timo Gerdes came third on Caram OE (Lunger: Claudia Döller-Ossenberg-Engels) with a score of 8.478.

3,500 spectators came to the Albert-Vahle Arena over the three days of the vaulting competitions, whereby both the Saturday and the Sunday were sold-out with 1,300 spectators apiece. 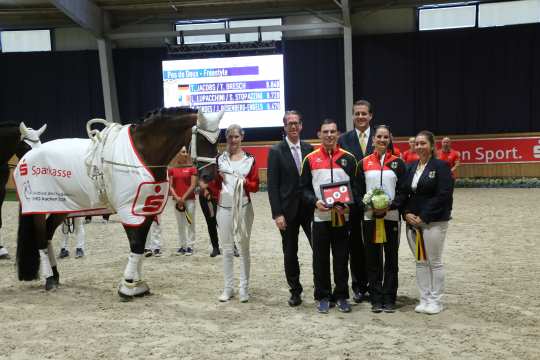