Guido Klatte on the way to defending his title

“This competition is a highlight for our riders,” the National Coach of the German Young Show-Jumpers, Markus Merschformann, assured. He was referring to the U25 Jumping Cup of the Foundation of German Competition Horses, Prize of the Müter Family, which comprises of a series of qualifiers in Braunschweig, Mannheim and Balve and the final at the CHIO Aachen. Today, the qualifier was on the agenda – and the rider from Lower Saxony, Guido Klatte, seems determined to repeat his last year’s victory at the Soers.

In 2015, the 20-year-old asserted himself against his peers on the holy grass of the jumping stadium in Aachen with Coolio. This year the rider from Lower Saxony had brought a different horse to the CHIO with him: Qinghai, the partner he claimed team silver and individual bronze with last year at the European Championships of the Young Riders. The pair won the penalty/time competition after putting in a speedy round: They finished the course almost three seconds faster than their closest rival. “I had actually told him, not to put his foot down yet,” the National Coach said with a grin.

Second place went to the just 19-year-old Marie Schulze Topphoff with Safira. Laura Jane Hackbarth (25) came third with Carisma. Like Guido Klatte and many other participants in this competition, Marie and Laura Jane have already been able to gather experience at European Championships, Marie already even at pony level. The National Coach additionally stressed that “the youngsters can’t learn as much as at the Soers anywhere else.” In spite of all the experience the juniors and young riders have collected in the saddle, “Aachen is always something completely different.” In this connection, Markus Merschformann took the opportunity to express his sincere gratitude to the Müter family for supporting the U25 Jumping Cup. 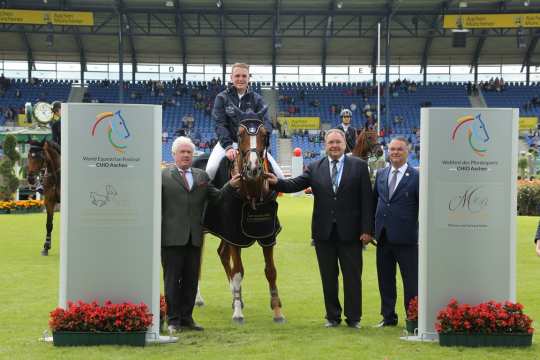