The World Equestrian Festival stands for world-class sport, but above all for being the biggest folk and family festival in the region. This was impressively demonstrated on Soers Sunday, the traditional open day.

“The people from Aachen have got their CHIO back,” said Frank Kemperman, Chairman of the Aachen-Lauresnberger Rennverein e.V. (ALRV), organisers of the event. He was “totally happy with a super first weekend.” 41,500 visitors attended the two “Horse & Symphony” concerts, the vaulting, the youth competitions and the Open Day, the Soers Sunday attracted 26,000 people alone.

Curious visitors were already waiting at the main entrance prior to the official admission time of 10 a.m. And they were amazed. They are used to being greeted by plenty of horses on Soers Sunday, but this year a monkey also formed part of the welcome committee. “Captain Nobbi” is the name of the approx. 3 x 4 metre design by the street artist, Paul Sous, which greets the visitors right at the start of the Albert-Servais-Allee. Street art can be found here and in many other places across the grounds, colourful eyecatchers, which underline how multifaceted the show is.

The colourful motifs invite people to take cheerful selfies. The “Öcher” (Aacheners) certainly took this opportunity to heart. And not only that. As usual, admission to the traditional “Open Day” was free of charge and a diversified programme awaited them. Not only the shopping village comprising of 230 international exhibitors and various restauranteurs were very well-attended, but also the many attractions that invited the guests to spend time, marvel and take part. The perfect family day or trip out with one’s friends!

The action kicked off at 11.30 a.m. in the Deutsche Bank Stadium with a festive ecumenical service under the motto “Turned to the son: Carried – together”. A gospel choir provided wonderful musical accompaniment to the open-air event. The official starting signal went off at 1.15 p.m. on the jumping warm-up area, which was followed by a colourful entertaining programme. The best seats around the “green platform” were snapped up quickly. Everyone wanted to have a good view of the exceptional show acts: Social Media star, Jesse Drent, and his Shetty stallion, Macho, were on board as well as the impressive carriages of Andreas Wintgens, magnificent Mustangs, the horse trainer Yvonne Gutsche and the Cowboys and Indians of the Biesenbach Riding School with their fast-paced pony jumping quadrille. Team Emsland also brought ponies with them to the Soers and enchanted the spectators with their act called “96 hooves dancing to the music”. In the course of the charity cooperation “Moments of Luck”, the four therapy centres from the region presented themselves under the motto “Praise to the Youth” and the youngest visitors enjoyed pony riding and visits by the CHIO Aachen mascot Karli and the WDR mouse.

For the first time this year, the visitors were offered top show jumping sport on Soers Sunday already: Top competitions with the best aspiring talents took place in the Driving Stadium, namely the NetAachen Prize for Young Riders (up to 21), the “U25 Jumping Trophy of the German Top Equestrian Sport Foundation, the Prize of Family Müter. And the youngsters were delighted at the frenetic applause they received from the many spectators. “This enthusiasm is fantastic,” said an overjoyed Frank Kemperman about the huge support the young equestrian talents received. 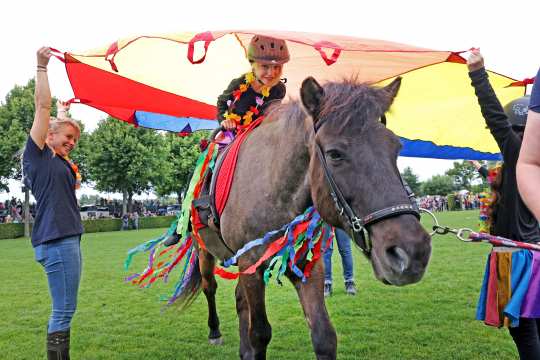 The many guests on Soers Sunday were able to enjoy a variety of performances. Photo: CHIO Aachen/Andreas Steindl