First U25 Dressage Nations’ Cup, the Prize of the Liselott and Klaus Rheinberger Foundation goes to the Netherlands

2017 is an historical year in the Deutsche Bank Stadium. For the first time ever a Nations’ Cup was staged for under 25-year-old dressage riders, the Prize of the Liselott and Klaus Rheinberger Foundation. This premiere helped the Dutch riders to overcome a trauma.

“Aachen always has a special charm for us,” revealed Alex van Silfhout, the Chef d’Equipe of the talented young Dutch dressage riders. And the father of the Olympic rider, Diederik van Silfhout, didn’t just mean the exceptional atmosphere at the Soers, but also the sport itself: “We are never good in Aachen!” He also thinks he knows the reason why: “The Germans are too strong.” However, today Team NED managed to leave the German squad trailing behind them.

With a total score of 145.605, Maxime van der Vlist with Bailey (72.289 percent), Denise Nekeman with Boston STH (68.395 percent) as well as Anne Meulendijks with MDH Avanti (73.316 percent) went down in history of the CHIO Aachen as the first U25 Nations’ Cup winners in the Deutsche Bank Stadium. These three riders are the best that Holland has to offer in this age group, emphasised van Silfhout and added with a laugh: “This year we have no reason to moan!”

The eternal rivals from Germany finished on a total score of 140.868. Things didn’t runs smoothly for the first rider already, Lisa-Maria Klössinger with FBW Daktari, actually one of the strongest German pairs: “The dressage arena is not the same as usual,” ascertained Klössinger, “in terms of its size alone. It intimidated Daktari somewhat.” This was no doubt also a reason why the two had both “highs and lows” today, as the U25 national coach, Sebastian Heinze, put it. Nevertheless, she was still awarded a score of 69.789 percent.

On the other hand, things went well for Bianca Nowag and Fair Play BB. The 22-year-old reported: “I had a great feeling. In the case of Fair Play the more impressive the environment is, the better she performs.” And indeed such a setting triggers off ‘positive nervousness” in herself too, explained Bianca Nowag. No wonder: “One is so proud to be able to compete here,” the 2015 European Champion of the Young Riders stated. She received 71.079 percent and high praise from the national coach to boot: “She demonstrated in the arena, everything we had hoped she would!”

The third member of the team was Juliette Piotrowski with Sir Diamond. The pair were the only ones in the team, who had already competed at the Soers, namely they took part in the U25 Tour last year, albeit without the Nations’ Cup classification. Finishing on a score of 69.789 percent, they didn’t quite live up to their potential today.

Third place with a total score of 140.474 went to the strong trio of Swedish riders Lina Jönsson with Quentin (69.316 percent). Mathilde Hannell with Deela Mae (66.605 percent) and Josefin Gyllenswärd with Don Angelo (71.158 percent).

The conclusion of the U25 national coach, Sebastian Heinze, after the first U25 Nations’ Cup in the Deutsche Bank Stadium was thoroughly positive in spite of the defeat by their eternal rivals from the neighbouring country: “For the riders it is the ideal opportunity to learn how to cope with the pressure. Riding for the team is something completely different rather than when one is just competing for oneself. All three are used to riding at championships, but rubbing shoulders with the stars in Aachen is a completely different game…” 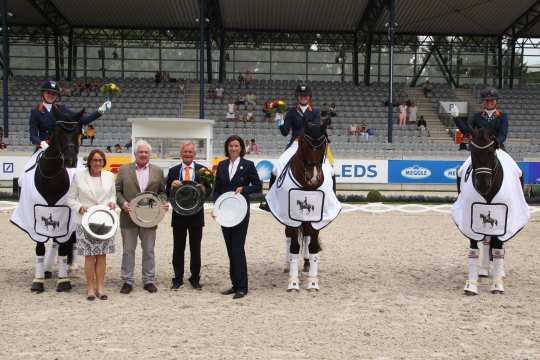