When “Youngstars” think about the CHIO

“Yes, of course we all want to compete at the CHIO Aachen one day,” laughed Elisabeth von Wulffen. The young dressage talent had just ridden out of the arena at the “Aachen Dressage Youngstars” after a highly successful ride, so it was quite natural for her to cast her thoughts ahead to the future.

“Yes, of course we all want to compete at the CHIO Aachen one day,” laughed Elisabeth von Wulffen. The young dressage talent had just ridden out of the arena at the “Aachen Dressage Youngstars” after a highly successful ride, so it was quite natural for her to cast her thoughts ahead to the future.

She certainly caused a stir when she succeeded in claiming the victory in the WOTAX Prize, the freestyle of the Juniors (aged up to 18), beating among others the top favourite, Romy Allard. “The rides went like a dream it is simply incredibly nice to compete here in Aachen, everything is spot on here: The organisation, the sport, the arena is wonderful,” raved the top junior rider afterwards. A small consolation for Romy Allard: She won the Prize of the Klaus Peters Family and claimed the title of best rider across all of the competitions.
More is not possible. The pony rider, Johanna Kullmann, who travelled to Aachen as the defending title holder, not only won all three tests, she also came second in both classes she was able to compete with two ponies in. “Unbelievable,” she beamed, “I didn’t put myself under any pressure, I simply wanted to show some good rides.” Like Elisabeth von Wulffen, in spite of being just 15 years old, she also has the CHIO Aachen and the Deutsche Bank Stadium that lies right next to the Albert-Vahle Arena at the back of her mind: “It is a magical venue,” she said.
The winner in the Prize of the Hans-Peter Simons Family, the Final of the Young Riders (aged up to 21), was unbeatable in the overall classification too: Kristin Biermann from Cloppenburg in Niedersachsen also rode a fantastic freestyle routine and was subsequently overjoyed of course – not least, because she succeeded in achieving something that the others have only dreamt about so far: Competing at the CHIO Aachen. Because a victory in the Prize of the Klaus Peters Family entitles the winner to compete at the CHIO Aachen. Lia Welschof and Linda Erbe came second and third in the class respectively.
The Show Director, Frank Kemperman, was more than satisfied: He commented that not only the sporting performances were top, “it was almost even more fun to see how the aspiring young riders cast their eyes on the adjacent Deutsche Bank Stadium and dream their dream of the CHIO.” Kemperman was also impressed by the “Aachen Late Night presented by Allianz“ on Saturday evening. The arena was very well-attended during the dressage show programme. The “Aachen Dressage Youngstars 2019” is scheduled to take place from December 5th-8th, a week after the “Aachen Jumping Youngstars – Salut Festival”. 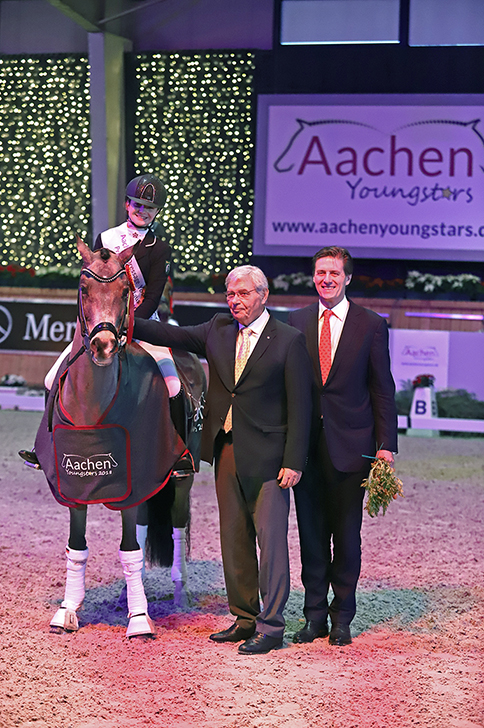 CHIO Aachen 2020 cancelled – World Equestrian Festival only to be staged virtuallyCHIO Aachen 2020 postponed to a later date in the yearCHIO Aachen increases the prize-moneyALRV: Stefanie Peters is to succeed Carl Meulenbergh - Birgit Rosenberg joins the Executive BoardYabusame and Taiko Drums, Manga and Olympic GamesThe Turkish Airlines-Prize of Europe at the CHIO Aachen – from now on under floodlightsTHE CURRENT CHIO AACHEN-MAGAZINEAdditional venue date for “Horse & Symphony”