The Turkish Airlines Prize of Europe is traditionally the highlight of the jumping competitions on the Wednesday of the CHIO Aachen, the World Equestrian Festival. The victory went to Canada, to the Olympic gold medallist of 2008, Eric Lamaze. The number one in the world ranking list, the French rider, Simon Delestre, came second with Qlassic Bois Margot. Third place was claimed by Olivier Philippaerts from Belgium with Challenge v. Begijnakker Z, incidentally a horse that already carried his father, Ludo Philippaerts, through the ring at the Soers.

After walking the course, the Rolex Grand Slam winner, Scott Brash, assessed it as being “testing but fair“. Brash added that the water ditch and the combination over the ditches were the two trickiest obstacles. As it happens, he proved to be right. An amazing 18 riders qualified for the jump-off – whereby Brash himself was not among them. In contrast, for example, veterans of the sport such as Ludger Beerbaum, for example, had to retire. Beerbaum’s stallion, Chaman, refused at the combination over the ditches. After the second refusal, the most successful active show-jumper in the world chose to retire.

So, the expression “testing” was certainly no exaggeration. The jump-off also proved to be demanding. The pairs that rode first risked a lot and picked up faults as a result. Daniel Deußer from Germany was the first rider to jump clear with his candidate for the Olympics, First Class van Eeckelghem. However, he wasn’t able to stay in the lead for long, because Christian Ahlmann’s followed him with Taloubet Z, his Ferrari as the man from Marl likes to describe his stallion. The horse did justice to his nickname, jumped clear and was faster than Deußer’s First Class. Nevertheless, his time was indeed beatable. Ahlmann ultimately came fifth and Deußer seventh.

When Eric Lamaze approached the first obstacle, everything was clear: Somebody had set himself a goal! Whereby Lamaze didn’t even have to push his little mare much. On the contrary: “She is very ambitious and always gives 100 percent. She is naturally fast too and needs a certain ground speed so that she has enough confidence to jump the wide oxers. When you ride her like that, she can jump everything.” Fine Lady has repeatedly proven this over the last months. And Lamaze and Fine Lady will also be able ride from victory to victory all over the globe in the future too. Namely, the General Sponsor, Turkish Airlines – which by the way was voted Europe’s best airline for the sixth time in succession – awarded the winner one million airline miles as a bonus. So we will no doubt be able to welcome the pair from Canada at the Soers regularly in the future too. 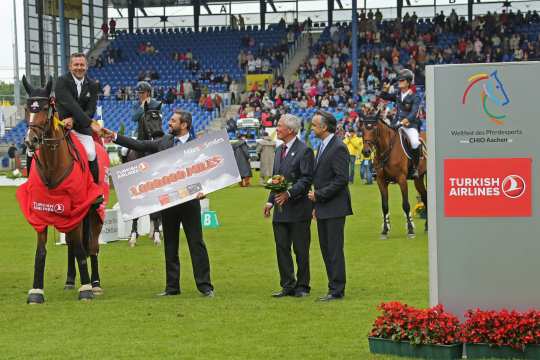