Tips from Brazil paved the way to victory

The victory in the Allianz Prize at the “Aachen International Jumping” was a Dutch/Brazilian co-production. Because the winner, Maikel van der Vleuten, received the decisive tip from the Brazilian rider, Marlon Modolo Zanotelli. Henrik von Eckermann from Sweden came second, ahead of Julien Epaillard from France.

It was an XXL jump-off with 21 pairs, which made it difficult to find the right tactics. To make things even more difficult: “I wasn’t able to watch hardly any of the jump-off,” said Maikel van der Vleuten. In situations like that it is great when one has good pals, because “my friend Marlon Zanotelli gave me some valuable tips,” commented van der Vleuten. Maikel van der Vleuten knows Aachen very well, has competed at the CHIO Aachen numerous times, but needless to say in the adjacent Main Stadium and on grass, of course. “But the Deutsche Bank Stadium is superb too and although only so few spectators were allowed to attend, the atmosphere was super. All of the riders enjoyed being back here,” explained the Dutch show-jumper. Van der Vleuten had saddled the ten-year-old Beauville Z, with whom he competed in Aachen for the first time – “up until now he was too inexperienced for the CHIO, but I am going to have a lot of joy with him in the future.”

Second place went to Henrik von Eckermann with Peter Pan, “of course, I would have like to have won,” the Swedish rider said with a grin. But luck was on his side twice, “because we brushed a pole and it is a great result to come second when there are 21 competitors in the jump-off.” Julien Epaillard was overjoyed all-round, he was especially impressed by the atmosphere: “That was really splendid, a joy to ride here,” remarked the French rider, who had brought Safari D Auge to Aachen with him.

The best German was the old hand, Ludger Beerbaum, who secured sixth place with the just eight-year-old mare, Mila. “I would never have imagined that I’d leave the ring as the best German rider,” Beerbaum commented. And even after all the years Ludger has been a professional rider, it was still very noticeable how passionate he is about the sport: “Being able to bring a horse like that on to top level, is something very special.”

There were happy faces among the organisers too. “Three fantastic days. We were delighted to be able to organise a show again. Being able to experience top sport here again, was good for the equestrian sport, but also for the heart and soul. Now we will look optimistically ahead: The CHIO Aachen begins in 292 days. Hopefully in the Main Stadium under normal conditions”, stated show director Frank Kemperman.

There was a special surprise for the winner too: During the prize-giving ceremony, the Dutch national anthem was played live by the Aachen Symphony Orchestra under the direction of Aachen’s Musical Director, Christopher Ward – a worthy conclusion to a show that was totally different in all sorts of ways and “we are mega happy that the team from Aachen staged this show here,” added Beerbaum. 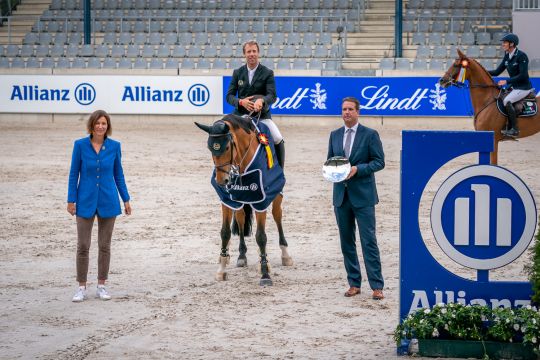 utch victory in the Allianz-Prize