The first part of the Lambertz Nations Cup of the dressage riders, the Grand Prix ended completely differently to all expectations: the USA in the lead, ahead of Germany. But after the Grand Prix Spécial in the MEGGLE Prize, the German dressage world was back in order. Especially for Isabell Werth.

Emilio’s birthday gift to his rider Isabell Werth was 79.128 percent in the MEGGLE Prize, the Grand Prix Spécial, which is simultaneously the second competition in Lambertz Dressage Nations Cup. Two reasons for joy for the most successful dressage rider of all time! Helen Langehanenberg came second with Damsey after scoring a personal record in the Spécial of 79.021 percent, followed by the American rider, Kasey Perry-Glass with Dublet (78.787 percent).

The two further German team riders, Dorothee Schneider with Sammy Davis Jr. and Jessica von Bredow-Werndl with Dalera BB, came sixth (76.404) and seventh (76.255) respectively. That meant that no one could take the victory in the Lambertz Nations Cup away from Germany. With a total score of 464.251 they asserted themselves against the USA (459.371) and Denmark (444.106). Things certainly didn’t look like they were going that way at first.

Because in the Grand Prix, the normally strongest German pair, Isabell Werth with Emilio, had a disastrous day and ultimately landed in 17th place, which left the path clear for the USA. In the meantime, the trust has been reinstated. Nevertheless Werth said: “I feel very guilty and I am so sorry for Emilio that I didn’t listen to what he was trying to tell me!” But the Westphalian-bred Ehrenpreis son has obviously already forgiven his rider: “Emilio was back to his normal self today and we are a team again!” After her misfortunate Grand Prix performance, Werth had to ride as the 12th pair today, so she hadn’t expected to stay in front until the end. “My colleagues lent me some support there. That was obviously their birthday present for me,” grinned the from today onwards 49-year-old.

It would only have been fair if her colleagues did help her since last year she did her fiercest rival Laura Graves (USA) the same favour last year. Namely, the MEGGLE Prize was staged on July 22, last year – Laura Graves‘ birthday – and she managed to beat Werth for the first time. Now Laura Graves has to do her homework, like Werth did after the Grand Prix. Namely, today it was her Verdades who had a bad day. He finished eleventh on a score of just 74.085 percent.

Helen Langehanenberg was amazed at her second place with the Hanoverian-bred Damsey FRH: “I already thought on Thursday that is the best we can do, but obviously not. I have only been riding again for three and a half weeks, our last test was in February. Maybe sometimes a break helps (laughs). I enjoyed the test today. I had a super safe feeling today and everything was really easy in spite of the heat.” What a comeback for the team European Champion who only gave birth to her daughter, Finja, four weeks ago and who was nominated for the team by national coach, Monica Theodorescu, only one week ago!

The American dressage rider, Kasey Perry-Glass, also put in fantastic performances here at the CHIO Aachen with the Danish gelding, Goerklintgaards Dublet. Two judges actually had placed her first. Perry-Glass and the elegant dark bay horse competed in Europe for the first time in 2016 and their performances were very popular here. Her appearance at Aachen in 2017 were however rather disappointing. But this year she even managed to leave the European Championships bronze medallist, Cathrine Dufour and Cassidy, behind her. And people say dressage is boring… 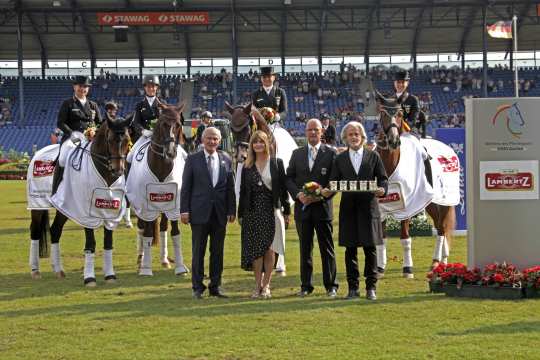