All good things come in threes for Jeanine Nieuwenhuis, who won the Freestyle of the U25 Tour in the Prize of the Liselott and Klaus Rheinberger Foundation.

The Dutch dressage rider Jeanine Nieuwenhuis and her 13-year-old KWPN gelding, TC Athene, were already victorious at the European championships in Rotterdam and Amsterdam. But they had never competed in Aachen before. The first impression? “I rode in and thought: ‘Wow, that is different to anything I have done before!’” Obviously, the 23-year-old had to get over the initial shock of it all, because she improved from competition to competition. She came fourth in the Intermédiaire II for the Nations cup with TC Athene, in the Short Grand Prix they finished second and today in the Freestyle the pair won with a score of 78.075 percent.

Second place went to a regular guest from Spain: Juan Matute Guimon. He and his 15-year-old Hanoverian-bred Don Diego Ymas were awarded a score of 76.515 percent. When the 20-year-old rode at the Soers for the first time, he was just 16 years old. As such he knows what he is talking about when he says: “It was super! As always! It is always a pleasure to ride here.” Aachen was as brilliant as ever, but he saw room for improvement in his performance today: “I have a new freestyle routine that I rode for the first time here. So, the timing with the music wasn’t quite ideal yet.” But you must have already ridden it in training?! “No, never.” Absolutely cool! But he and Don Diego Ymas have been a harmonious team for years. “We know each other inside out. That helps of course!”

The best German rider, who finished third, was Lisa-Maria Klössinger with Daktari. Achieving a score of 76.30 percent, they were pipped at the post. Lisa’s answer in response to the question how her ride was can’t be quoted, only described – a wide grin and thumbs up.

Jil-Marielle Becks and Damon’s Satelite, who even surprised herself by winning the Intermédiaire II and the Short Grand Prix, came fourth today on a score of 75.10 percent. 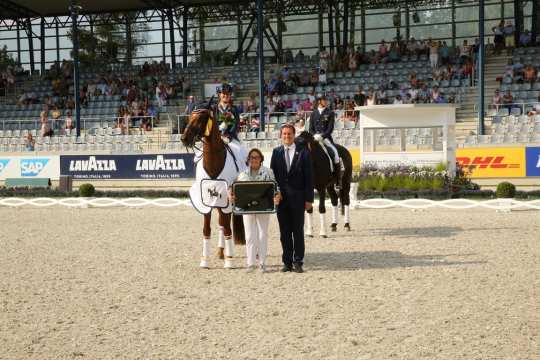