The CHIO Aachen is at least this year the show of the come-backs in the dressage arena. For example, it was two sorely missed gold medal horses that headed the lap of honour in the HAVENS Pferdefutter Prize today.

Isabell Werth’s team world champion, Bella Rose, competed at the CHIO Aachen the last time four years ago. To be precise, she didn’t see a showground at all for three and a half years due to injury. She competed for the first time in Austria four weeks ago. But of course the atmosphere there was nothing compared to that of Aachen, admitted Isabell Werth. The mare celebrated her come-back at the Soers with a score of 77.587 percent and the victory in the Grand Prix of the CDI Tour in the HAVENS Pferdefutter Prize. The test wasn’t completely free of mistakes yet, but Isabell Werth beamed nevertheless: “I am simply happy!” She took complete responsibility for the mistakes. “The mare never wants to do anything wrong!” It is simply down to improving the fine tuning. “And we have to channel her temperament a little more efficiently.” Indeed that is the plan for the Grand Prix Spécial on Friday.

The situation is similar for the pair, who finished second, Dorothee Schneider and Showtime. The Hanoverian-bred Sandro Hit son, with whom Schneider took team gold in 2016 at the Olympic Games in Rio de Janeiro, last competed in Munich in November 2017. “Yes, he was very switched on,” laughed Schneider. “It was quite courageous to ride in Aachen as our first competition…” But it certainly did no harm. The judges awarded the pair a score of 75.652 percent in spite of a few bitter mistakes. Like Isabell Werth, Dorothee Schneider also said it had been down to the fine tuning between the two of them in the competition. “But I am totally satisfied!”

So was the national coach, Monica Theodorescu: “I find it great how Bella Rose and Showtime are performing and I am happy that they are back again. Sure, they made a few mistakes. But that is down to the lack of condition and competition routine.” They gained a bit of both today already.

The German success was rounded off in the HAVENS Pferdefutter Prize with Jessica von Bredow-Werndl taking third place with Zaire-E on a score of 72.609 percent and Fabienne Müller-Lütkemeier finishing fourth with Fabregaz on a score of 71.935 percent.

The prize-giving ceremony of the Grand Prix was the last on the CHIO 2018 Wednesday. 3,500 people attended the dressage competitions today. 29,000 spectators followed the show jumping in the Main Stadium. 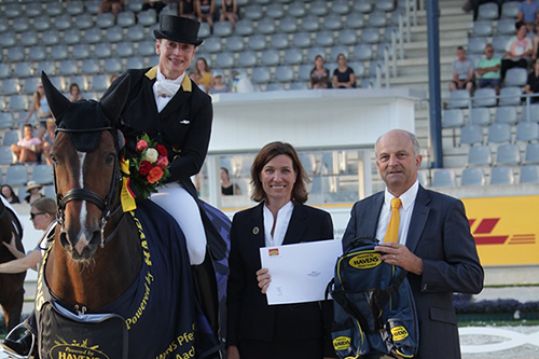