Anyone, who takes a close look, will also find traces of the City of Aachen in the famous Palace just outside Paris: In the Hall of Mirrors, the most magnificent room in the whole palace, a ceiling painting reminds the onlookers of the 1668 peace treaty of Aachen. Thanks to the CHIO Aachen, the old Emperor’s city was at least for one whole day much more present in Versailles: France presented itself as the partner country of the CHIO Aachen 2019 in the scope of a press conference.

The official part of the press conference in the Dufour Pavilion of the palace had long finished, when the Show Director of the CHIO Aachen, Frank Kemperman raved not only about the CHIO, but also about horses in themselves to the French Sports Minister, Roxana Maracineau. The politician – and former Swimming World Champion – immediately asked him a favour: During her visit to Aachen, she would like to sit on a horse for the very first time in her life. “We’ll take care of that,” promised Kemperman.

Prior to this they had presented the partnership which is supported by the Ministry of Foreign Affairs during the press conference and subsequent reception. “We are full of anticipation and very proud to be the partner country of this year’s CHIO Aachen,” commented Maracineau. France will not only present itself as a significant horse nation, but also as from its touristic and cultural sides – among others in the scope of the “Rue France”, a large exhibition surface in the heart of the CHIO Village. For example, a 15-metre high Eiffel Tower will be erected there. Roxana Maracineau emphasised the perhaps most important effect of the sport, namely its people-uniting aspect: “President Macron has placed sport and its social function very high on his list of priorities and the partnership between France and the CHIO Aachen fits in wonderfully here.“ Stephan Mayer, Parliamentary State Secretary at the Ministry of the Interior, came to Versailles and was delighted about the standing that the CHIO Aachen enjoys among the French partners.

Like Roxana Maracineau and Stephan Mayer, Frank Kemperman, Chairman of the organisers, the Aachen-Laurensberger Rennverein (ALRV), don’t merely consider the CHIO Aachen to be a sporting event: “Where 350,000 people come together year after year, it is not simply about horses. The people talk a lot, tell stories, one gets to know people and makes friends – the show connects people,” explained Kemperman. This is precisely the key idea behind the partner country. France is already the 17th partner country of the CHIO, and “I am already convinced now: It is going to be a very special one.” He reported that the exchange has been so intense over the past months, the cooperation has been fantastic and that there is immense joyful anticipation on both sides.

Pierre Durand, who won individual Olympic gold in show jumping at the 1988 Games in Seoul summed up what Aachen means to the riders in a nutshell: “Aachen is our temple. A holy place.” Mathieu Lemoine, team Eventing World Champion, shares this opinion: “It is the place where everyone wants to ride, a place that is unparalleled across the globe.”

France will not only impressively present itself on the “Rue France”, but will also decisively co-shape the shows: For example, the Opening Ceremony on the evening of July 16th, will be as equally coined by the partner country as the spectacular “Horse & Symphony” concerts on July 12th and 13th, which start at 8.30 p.m. respectively. Tickets are still available online at www.chioaachen.de/tickets as well as from the hotline on +49-(0)241-917-1111. 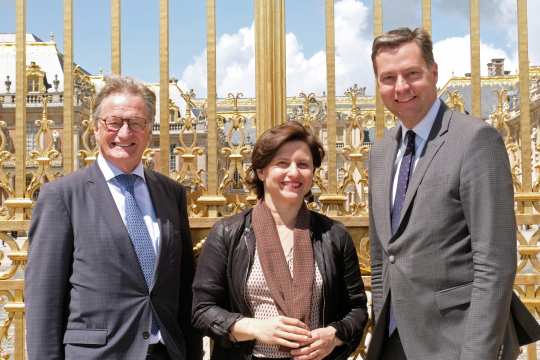