A Danish dressage team has never won the Lambertz Nations' Cup before. This year not only the team won, Cathrine Dufour also rode to victory in the MEGGLE Prize, her third golden ribbon this weekend.

The Lambertz Nations’ Cup was a highly exciting affair in 2022! It was a tight race between the German and Danish teams right until the very end although the defending title holders had a slight advantage. The last to go was Cathrine Dufour and Vamos Amigos and once again they completed the test with a score of over 80 percent. 80.064 to be exact. So, it was all down to the final rider of the German team, Isabell Werth with her DSP stallion, Quantaz. They got off to a wonderful start. But then the head judge, Susanne Baarup at C, rang the bell. Quantaz was bleeding at the mouth. Werth was thus disqualified and the Danish team were celebrated as the winners of the Lambertz Nations Cup 2022 on a total score of 459.421 points ahead of Germany (454.903) and Sweden (440.499).

Frederic Wandres came second again in the individual classification of the MEGGLE Prize with Duke of Britain (78.468) behind Cathrine Dufour. And third place also remained the same: The white ribbon went to Finland’s Henri Ruoste with Kontestro (76.404).

Denmark’s Chef d’Equipe Anne-Mette Binder said: “Of course we are proud, actually overwhelmed.” Her particularly thanks went to the riders. In addition to Dufour and Vamos Amigos, the Danish team was represented by Carina Cassøe Krüth with Heiline’s Danciera (74.50), Daniel Bachmann Andersen with Marshall-Bell (73.696) and Nanna Skodborg Merrald with Atterupgaards Orthilia (73.348). Particularly, Daniel Bachmann Andersen hadn’t reckoned on being on the winner’s podium of the press conference at the CHIO Aachen. Because his European Championships horse, Marshall-Bell, was sold to Austria a few weeks ago. But then the new owner decided to place the horse at his disposal in Aachen, because this is the last trial for the World Championships in Herning. Daniel Bachmann Andersen gratefully accepted. However, he didn’t get the opportunity to ride the gelding until just before the CHIO Aachen. So, he had only ridden him around eight times before travelling to Germany. “Yes, that was stressful, but I have a good team behind me and I am delighted at the outcome.”

Talking about stressful – Ingrid Klimke was extremely busy today. She was the first rider ever to compete in the Nations’ Cup in two disciplines: With Siena just do it in the SAP Cup and with Franziskus in the Lambertz Nations’ Cup.  No problem for Ingrid Klimke, as the Master of Riding explained later: “I enjoyed today! When I ride one horse after the other at home it is much more stressful than here and I am very proud to have been on the Nations’ Cup team in both the dressage and the eventing!” Klimke came 14th in the MEGGLE Prize with “Franz” on a score of 72.383 percent.

Benjamin Werndl, who was also on the German team for the first time with Famoso was also very proud. The pair came fifth on a score of 75.553 percent. “I have always wanted to ride on the team together with Isabell and my sister.” 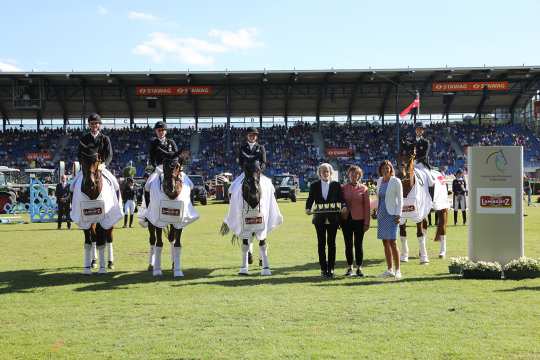 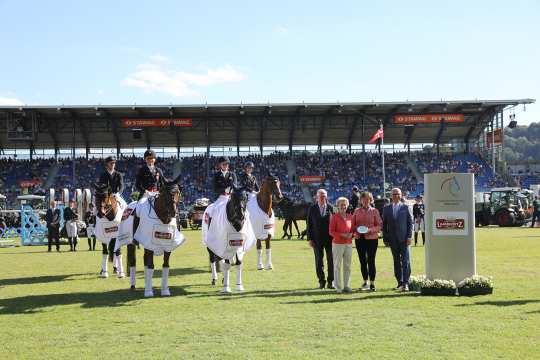 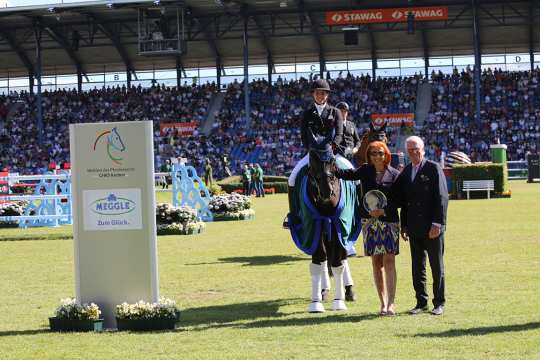