After the eventers, the four-in-hand drivers took to the cross-country course at the Aachen Soers in the Prize of schwartz Group. The victory went to Belgium. Ijsbrand Chardon takes the lead in the overall classification of the Prize of the Richard Talbot Family. The Dutch team are currently topping the rankings in the team classification of the Boehringer Ingelheim Nations Cup.

The Belgian driver, Glenn Geerts, had the fastest time in the Marathon of the schwartz Group today, followed by Christoph Sandmann from Germany. Geerts was the penultimate starter in the Marathon.

Ijsbrand Chardon, the veteran driver from the Netherlands, had worked his way forward into second place to defend his title in the Prize of the Richard Talbot Family. He had been in third placed after the dressage. Boyd Exell from Australia won the dressage. However, after only coming seventh today, he slid down in the rankings behind his eternal rival, Chardon. Christoph Sandmann finished third. Mareike Harm, who was second after the dressage, drove into twelfth place today, which puts her in seventh place in the interim results.

The Dutch team are currently lying in first place in the Boehringer Ingelheim Nations Cup on a total interim score of 320.2 minus points, ahead of Belgium on 357.28 minus points. 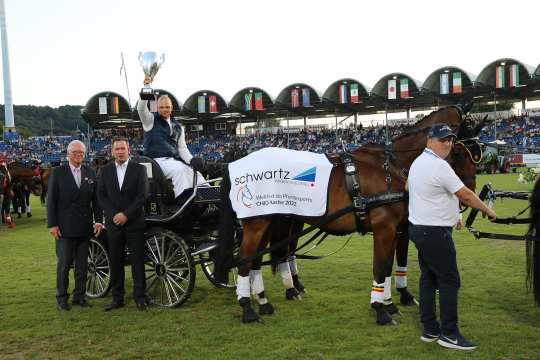