Felix Haßmann and the SAP-Prize, that’s a good combination! In 2017, the 33-year-old already came second in the competition, this time he crossed the finish line first, both times with his speedy partner, SL Brazonado.

Felix Haßmann’s SL Brazonado already proved how fast and agile he is earlier this week when he came second in the competition over ditches and banks. The SAP-Prize was the rider’s last opportunity to pick up a further rosette at the CHIO Aachen 2019. It turned out to be the golden one – with a clear round in 57.72, the rest of the field didn’t have a chance of catching Haßmann. The Dutch rider, Doron Kuipers claimed second place with (58.21), followed by Eduardo Menezes from Brazil with Ennebel van het Posthuijs (59.31). 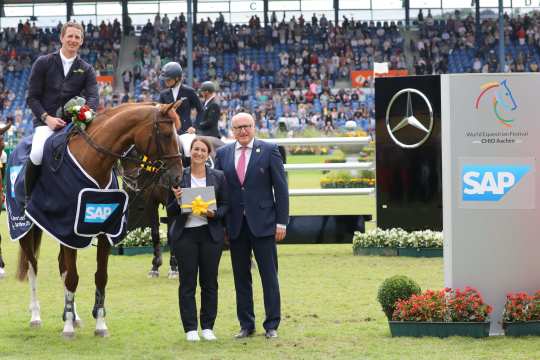 The winner is congratulated by Aileen Trunk, SAP equestrian sponsoring, and Wolfgang "Tim" Hammer, member of the ALRV supervisory board.