Finally on the Winners’ Board! Daniel Deußer wins the Rolex Grand Prix

“It is a dream come true!” Daniel Deußer had just been presented with the trophy for his victory in the Rolex Grand Prix in Aachen and he couldn’t really believe it. He had been so close so many times before.

The two of them stood in the middle of the holy grass at the Aachen Soers, Killer Queen wrapped in the winner’s blanket in Rolex green, Daniel Deußer with a radiant smile on his face. And the trophy on a pedestal was glimmering silver in the sun in front of him. “Whether there are some carrots inside?”, Killer Queen seems to have asked herself carefully taking a sniff. Whoops, the trophy fell to the floor. Killer Queen spooked backwards and Daniel Deußer buried his head in his hands.

An amusing anecdote of a big day in the career of the number one in the world ranking list. Daniel Deußer has celebrated many big victories in his life. But as he said: “The Rolex Grand Prix is always very special and as a German it was my big goal to win here in Aachen. I have come close a couple of times, but finally I won it today. It is a very emotional moment for me to be honest. This is definitely one of the top wins in my career.”

It was a long, hard road, two rounds and a jump-off. And an exquisite field of competitors comprising of some of the best riders in the world, including among others for example the Olympic gold medallists, Ben Maher and Explosion W, the team silver gold medallists from Tokyo, Laura Kraut and Baloutinue, not to forget Scott Brash, the only rider who has won the Rolex Grand Slam of Show Jumping to-date.

From the first course to the very last, Daniel Deußer and Killer Queen cruised through the Soers, as if they were competing in novice style classes. Every distance perfect, no pulling, no pushing, stylish riding. Then, the pair had to go first in the jump-off. The clock stopped at 41.85 seconds. “That won’t be fast enough,” was the verdict from the stands. However, the sceptics had underestimated Killer Queen’s scopey gallop.

One rider after the other tried to crack Deußer’s time. A pole at the first fence fell for Belgium’s Jérôme Guery and Quel Homme du Hus, the team bronze medal winner of Tokyo. Next to go were their team colleagues from the Olympic Games, Gregory Wathelet and Nevados S. But they couldn’t top Deußer’s time. Although, Wathelet really pushed his grey stallion forward on the long stretches in between the fences: 42.83 seconds.

Then came Laura Kraut. The Hanoverian gelding, Baloutinue, who had already demonstrated what a brilliant horse he is by jumping clear in the Mercedes-Benz Nations Cup, enabling the USA to claim the victory. The pair were fast, very fast: 41.08 seconds. But the gelding brushed a rail and Kraut’s dream of eternalising her name on the Winner’s Board fell to the ground with the pole.

The crowd applauded ecstatically when Ben Maher entered the ring with Explosion W. And the chestnut horse spanned his wings and flew round the course, like Pegasus. However, a few fences later the pole fell. Four faults. His time of 40.67 seconds would have sufficed.

The next on the starter list was the “Master of Faster”, Scott Brash. The Scottish rider sped to the first obstacle with Hello Jefferson ready to race, but after picking up four faults Brash curbed the pace slightly and crossed the finish line in a time 44,03 seconds.

What went through Deußer’s head in that moment? “To be hones at that moment I was happy,” he answered later with a grin. Understandable.

But he still couldn’t breathe out yet. Because there was still one rider to go: Brian Moggre, 20 years old, with his Balou du Reventon. The round wasn’t quite so harmonious as Deußer’s, but the stallion gave everything for his rider and as the two of them catapulted over the Rolex Oxer, the last obstacle, the crowd cheered them on. But it didn’t quite suffice. The clock stopped at 42.16 seconds. Standing ovations for this young man, who promptly threw the reins away and hugged Balou du Reventon’s neck. The crowd could hardly decide who they were happier for – for this young American who made his debut at the Soers this year or for Daniel Deußer, who had finally succeeded in winning the Rolex Grand Prix after several close calls.

Daniel Deußer later: “I thought it was a disadvantage to go first, because I hadn’t been able to see how many strides to ride between the fences, but I simply stuck to my plan and it put pressure on the others.” That his plan worked out was “a dream come true,” as he noted. “We had a fantastic show here, even if there were only half as many spectators.”

Brian Moggre: “I am thrilled: I am going to be honest. I have dreamt about riding in Aachen since I was a little kid. I used to watch it on TV. Balou hasn’t just made it a positive experience for me, it has been an awesome experience.“ The pair haven’t been on the team for very long. Up until 2020, the stallion competed successfully with the Irish rider, Darragh Kenny. Then his owner decided to give him Brian to ride. “I put myself under a lot of pressure,” Brian stated. “But his owner hasn’t put any pressure on me at all, she just wants the horse to be happy and I truly love him so much.”

Gregory Wathelet is familiar with the feeling that Daniel Deußer will be taking home tonight. He won the Rolex Grand Prix in 2017 with Corree. Today, he finished third with Nevados S.  “Of course, I want my name on the wall again. But I am very happy with my horse, he was amazing, he jumped three clear rounds again. Two other riders were better than me today, that’s the way life goes.“ 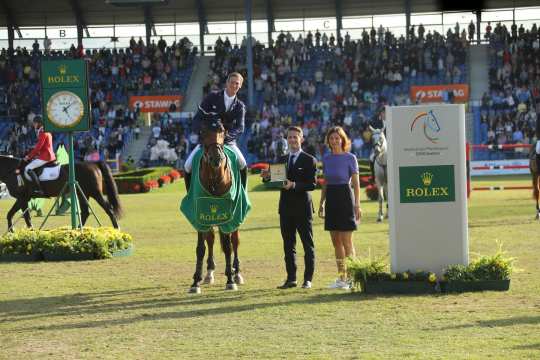