World-class at the CHIO showgrounds in the Deutsche Bank Stadium - to be broadcast by ARD, ZDF and WDR – with spectators

The demand and the sweet anticipation are already immense: In 2020, there is going to be an international jumping tournament in Aachen. The organisers of the CHIO Aachen are inviting people to the “Aachen International Jumping” from September 4th-6th, 2020. Fifty top international riders and 25 of the best young riders are to compete in the Deutsche Bank Stadium. ARD, ZDF and WDR will be broadcasting the event, a majority of the competitions will be transmitted live.

Many of the big names of the show jumping sport have already confirmed their participation, “there is huge interest in acquiring a starting place,” said Frank Kemperman, Chairman of the organising company, the Aachen-Laurensberger Rennverein e.V. (ALRV). Top national show jumpers like Marcus Ehning, Ludger Beerbaum, Daniel Deusser and Christian Ahlmann will be taking part alongside international stars. For example, Penelope Leprevost and Kevin Staut from France; Eric Lamaze from Canada as well as Henrik von Eckermann and Peder Fredricson from Sweden have all confirmed their participation.

“Not only the athletes, but also the fans of the equestrian sport are longing for a live experience,” reported the General Manager of the Aachener Reitturnier GmbH, Michael Mronz. This is why spectators are to be allowed to attend in line with the current specifications. We are presently working out the hygiene and safety concept in close collaboration with the authorities. Details, including information regarding the ticket sales, will be announced shortly.”

Otto Becker, the national coach of the German show jumping team is elated about the Aachen International Jumping: “Aachen not only stands for the best sport, but also for the very best conditions, the showgrounds at the Soers and the organisation are simply unparalleled.” Becker added that it is very good that the CHIO Aachen team are doing something for the sport and the riders. Already over the past few weeks the ALRV has been placing its showgrounds at the disposal of professional riders as a training option, “that already went down incredibly well,” the national coach reported.

Peter Weinberg, chief coach of the Belgian show jumpers and member of the Advisory Board of the Aachen-Laurensberger Rennverein e.V. (ALRV) commented, “The training days already demonstrated how high the demand is. And as a national coach, I now also need shows to be able to assess the performance level of my top horse and rider combinations.” Among others, Weinberg is sending Pieter Devos, currently fourth in the world ranking list, to Aachen. 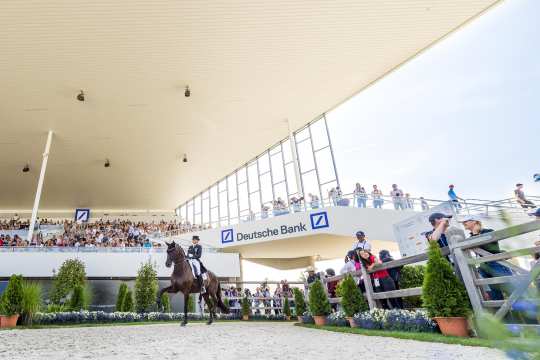