Philipp Weishaupt has won the CP ‘International’, presented by Rolex, the Grand Prix of the CSIO Spruce Meadows ‘Masters’ 2017. The German rider asserted himself in the saddle of LB Convall on Sunday afternoon after two rounds against the top stars of the international show jumping sport and thus triumphed in the second leg of the year of the Rolex Grand Slam of Show Jumping. After having won the Rolex Grand Prix at the CHIO Aachen in 2016, this was the second Major victory in the career of the 32-year-old show-jumper.

“It is impossible to describe the feeling of winning here in words! My sincere thanks go to my horse LB Convall, without him I certainly wouldn’t be standing here as the winner. He has simply incredible quality,” stated Philipp Weishaupt, who was the only rider to finish double clear after both rounds, relegating Luciana Diniz (POR) with Fit For Fun 13 and the American McLain Ward with HH Azur into second and third place, respectively. Philipp Weishaupt will now once again take on the ultimate challenge in the show jumping sport, the Rolex Grand Slam of Show Jumping: The rider, who succeeds in winning three equestrian Majors directly in succession, goes down in history as the Rolex Grand Slam Champion and receives a bonus of one million Euros. So, should Philipp Weishaupt manage a further Major victory in December at the CHI Geneva 2017, he will be riding to take the Grand Slam title in March 2018 at The Dutch Masters in ´s-Hertogenbosch, the Netherlands. “What Scott Brash pulled off two years ago, namely three Major victories in a row, was sensational and probably no one will be able to repeat this feat in a hurry. But I will certainly concentrate all my energy on trying to do so,” promised Philipp Weishaupt with a view to the next legs of the Rolex Grand Slam of Show Jumping.

Grégory Wathelet also gave it his very best shot in Calgary, nevertheless the winner of the Rolex Grand Prix of the CHIO Aachen 2017 simply wasn’t able to claim his second consecutive Major victory at the Spruce Meadows ‘Masters’: The Belgian rider excelled with convincing performances in the ring throughout the week of the show. However, on Sunday Wathelet and his stallion Eldorado van het Vijverhof finished 29th in the rankings of the CP ‘International’, presented by Rolex after picking up eight faults in the first round.

The outcome of the Grand Prix wasn’t optimal for Pedro Veniss either, who after claiming the gold ribbon in the Rolex Grand Prix of the CHI Geneva 2016, could have picked up a 250,000 Euro bonus in Calgary for two Major victories within one Grand Slam cycle: the 34-year-old had one fence down in the first round with his top horse, Quabri de l’Isle, and also collected one penalty point for exceeding the time, which ultimately meant 22nd place for the Brazilian show jumper. 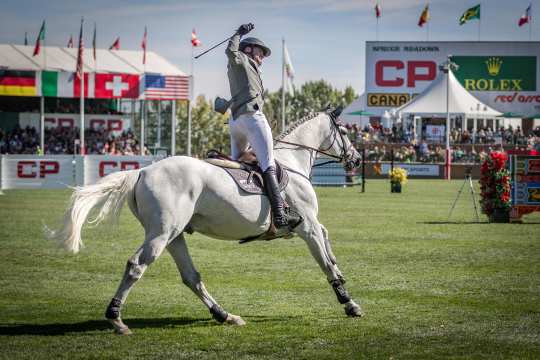