From coloured notes to the SAP-Cup simulator

Digital, innovative and lots of good ideas: SAP is the official technology partner of the World Equestrian Festival

It all began with coloured notes. The digital experts from the global company SAP and the CHIO Aachen team met up in the “AppHaus” in Heidelberg a few years ago to discuss how one could jointly lead Germany’s biggest sporting event into the digital age. The outcome has been an exciting and equally successful partnership.

It is THE eye-catcher in the CHIO Aachen Village in 2019: The eventing simulator of the company Racewood on the Mercedes-Benz exhibition area. It is especially exciting because SAP has linked it – virtually – with the eventer’s cross-country course of the SAP-Cup at the CHIO Aachen. A sensational experience. And the latest development of the long cooperation between SAP and CHIO Aachen. However, not only the simulator is a genuine head-turner. The cross-country course of the SAP-Cup has been completely visualised by the 3D-visualisation experts of Walbert-Schmitz. And is now available as a virtual reality experience. The time waiting to have a go on the simulator couldn’t be spent in a more spectacular way.

The eventing simulator at the CHIO Aachen

When the first brightly-coloured notes landed on the walls in Heidelberg seven years ago, the ideas were called things like “iKarli”. The idea was a personalised show companion for the smartphone. Today, there is an innovative and equally emotional event app, which picks up on many of these initial ideas. Among other things, a personalised calendar combined with push messages, which send individually adaptable notifications at exactly the right moment in time. Quite a lot of the original iKarli has remained intact, but in the meantime it has been enhanced by high-class, cutting-edge technological developments. “The SAP team helps us make the CHIO even more experienceable, more transparent and more interactive with the aid of state-of-the-art technology,” commented Michael Mronz, General Manager of Aachener Reitturnier GmbH. According to the joint SAP and CHIO creed, there is no tradition without innovation. 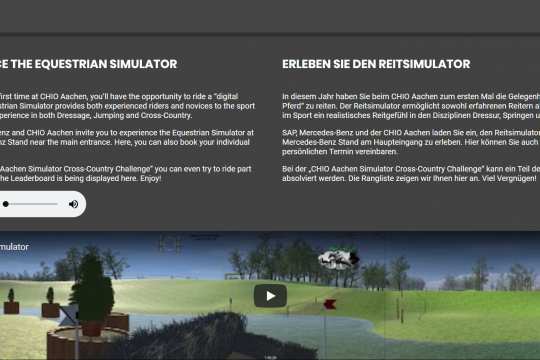 SAP and the CHIO Aachen

The cooperation with the CHIO Aachen began in the year 2012. SAP has been the official technology partner since 2013 and in this role also supports the “Digital CHIO Aachen” initiative, among others in its capacity as sponsor of the mobile event app and of technical prototypes as well as ultra-modern showcases. For example, in 2013 together with the team from Aachen, the “Spectator Judging” function was invented, which one couldn’t imagine being without in the dressage sport today, the innovative “Live Tracking“ of the riders on the cross-country track of the eventers is also a product of this think tank.

Beyond this, SAP also sponsors the “SAP Jumping Prize” and from this year onwards is also lending its name to the eventing competition, the “SAP-Cup”. VIP guests meet up in the “SAP Bar” in the exclusive “Champions Circle” and also a novelty this year, the “SAP Riders’ Corner”, located underneath the Judges’ Tower offers the riders and officials a place to chill out – they can also follow the “SAP Equestrian Insights” here live  – current data and analyses on the dressage, jumping and eventing. 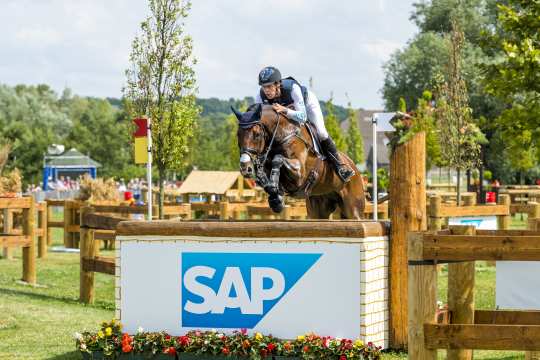 This year SAP is the new sponsor of the SAP-Cup, an eventing competition that spans two (July 19th/20th) comprising of individual and team classifications for the Nations Cup. As in the previous years – SAP equips the riders with sensors and presents the data live in the CHIO Aachen app as well as regularly on the monitors in the stadium and around the grounds, so that the spectators don’t miss a moment of their favourites on the course. Several riders will also be kitted out with helmet cameras again – including Ingrid Klimke – the resulting videos combined with data and exclusive comments will enable the spectators to experience and comprehend the exciting rides with all possible information as if they were “in the saddle” themselves. Furthermore, the virtual 3D tour gives all visitors interested in eventing an initial detailed, digital view of the course.

The new “EquiRatings Prediction Center”, powered by SAP is a further highlight: With the aid of the latest SAP predictive analytics technology, SAP and their data science partner, EquiRatings, have developed a new, statistical eventing model, which calculates the riders’ probable results and chances of winning, prior to and during a competition. The fans can follow these predictions and select their three top favourites, so that a “CHIO fan trend” ensues. The data and analyses are additionally available to the press and commentators and also flow into the “Stacks” strategy app, via which the eventing fans can give their tip for each rider in every phase of the competition in line with or contrary to the statistical predictions and in turn build up their “Expert Stack”.

For the first time, the new “CHIO Aachen Fan League” allows the visitors to collect valuable points for the fan ranking list via the CHIO Aachen app or the Spectator Judging app in all vaulting and dressage competitions during the entire show. The new league concept was developed jointly together with SAP’s partner, Black Horse One, in order to allow the dressage spectators in Aachen further interaction.

Beyond this, the hitherto, paper-based evaluation method implemented in the dressage is being switched over to the new “eDressage” system, powered by SAP. Thanks to the technology that was developed by Black Horse One in cooperation with SAP and which is recognised by the FEI, which received very positive feedback – from the judges, riders and fans – last season since its introduction at the FEI World Cup shows, the scribes can enter the scores directly on the iPad; the judges sign them digitally and the data is available in real-time and is safely saved in the SAP Clout platform. This enables trends and analyses to be displayed immediately during the rides, also for freestyle competitions and the results are available directly for the crowd and the commentators. As a further advantage the riders are sent their score sheets after the show by email – thus doing away with long routes and legibility problems. The judges are delighted about further diversified analysis possibilities, which will enable them to further enhance their expertise both individually and jointly.

In the VIP area and the new “Riders’ Corner” sponsored by SAP at the entrance to the Main Stadium, touchscreens serve as the central control unit for the visualisation of all live data and analyses as well as of all further contents such as historical data, videos, the simulator leaderboard and the CHIO Aachen quiz. In addition, the social media posts collected on the CHIO Aachen will be displayed on the SAP Social Media Wall in the Press Centre as well as on all showroom monitors.

The new course visualisation of the SAP-Cup can also be experienced on these stations using data goggles based on a 360 degree video – the big visualisation that encompasses the complete 3D effect and total freedom of movement is available to the visitors at the Mercedes-Benz stand.

SAP and Mercedes-Benz present their cooperation 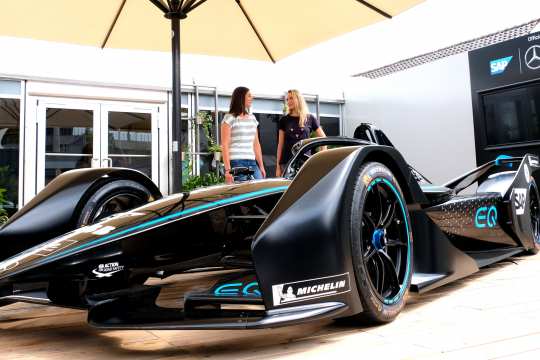 The Mercedes-Benz EQ Silver Arrow 01 in the CHIO Aachen-Village.