The Danish dressage rider, Anna Kasprzak and her big hope for the future, Quarton, dominated the Small Tour at the CHIO Aachen 2017. As in the Prix St. Georges, they also took the victory in the Intermédiaire I, the WOTAX Prize.

Anna Kasprzak’s goal with Quarton is clear: “It is not going to stop here!” In other words: The 8-year-old Quaterback son is to become Kasprzak’s future Grand Prix horse. The Danish rider is convinced that he is made of the right material. “We have to get to know each other better at shows and there are a few small details we have to work on. But overall I already had a very good feeling today, everything was so easy and matter of course.” The judges were impressed too and awarded the pair a score of exactly 74 percent.

The dark chestnut is now going to have a well-earned break. Then, over the winter the project “Grand Prix” will gradually get underway. “Our aim is to compete in the first classes at that level next year, but first of all at small, national shows,” the Olympic rider noted. And then perhaps already at the CHIO Aachen in 2019.

Helen Langehanenberg’s plan with the Hanoverian-bred Belissimo M daughter, Brisbane, is very similar. The team World Champion has been riding the elegant chestnut mare for around a year. “She has very strong nerves and a very calm temperament,” is how Langehanenberg described the advantages of her horse. She is already qualified for the Final of the Nuremberg Burg Cup, which will take place in December. And after that Brisbane is also to start competing at the higher level, if everything goes to plan. The pair improved their performances this season from show to show and they crowned their first appearance at the CHIO Aachen today with a score of 73.763 – almost three percent more than in the Prix St. Georges. And that in the pair’s first ever Intermédiaire I class.

The Spanish rider Juan Matute Guimon came third with Dhannie Ymas (73.395). Beforehand, the just 19-year-old rider came second in the Grand Prix Freestyle of the U25 Tour with his second horse, Don Diego Ymas. He attracted the public’s attention for the time in 2015 when he surprisingly won the Junior European Freestyle Championship with Dhannie. Today, he beat the team Olympic gold-medallist, Kristina Bröring-Sprehe, with her aspirant for the future, Destiny OLD by Desperados (72.158). 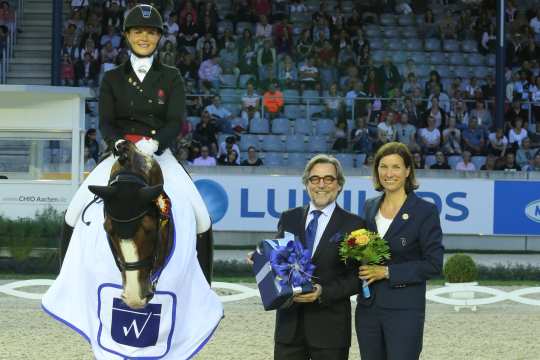