Frederic Wandres is experiencing the weekend of his life at the CHIO 2022. Whenever he rides into the Deutsche Bank Stadium, he leaves it with a top placing. The WOTAX Prize, the Intermédiaire I, was no exception.


As was the case in the Prix St. Georges, Frederic Wandres and the ten-year-old Hanoverian-bred gelding Quizmaster by Quasar de Charry put in the best performance in the Small Tour in the Deutsche Bank Stadium today. They secured themselves the victory in the WOTAX Prize, the Intermédiaire I, on Saturday evening with a score of 75.382 percent.

Four of the five judges had placed them at the top of the class. Only the Swiss judge at H, Hans Voser, awarded Ingrid Klimke and her Westphalian-bred stallion, Freudentänzer,  a clearly higher score than Wandres. The son of Klimke’s Grand Prix stallion Franziskus notched up a score of 73.412 percent. Hans Voser had awarded the pair 75.147 percent. Third place went to the Spanish dressage rider, José Antonio García Mena with the just eight-year-old Trakehner Nautilus by Connery, who were awarded exactly 71 percent. 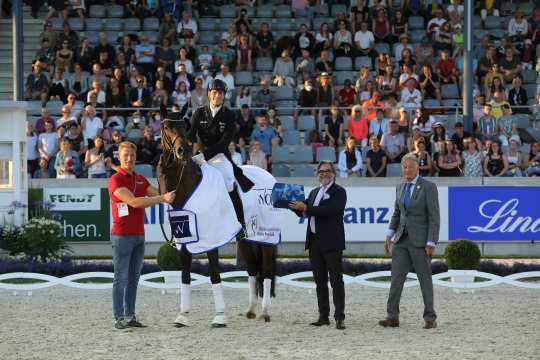