Frank Kemperman, Chairman of the Aachen-Laurensberger Rennverein e.V. (ALRV) and Michael Mronz, General Manager of the Aachener Reitturnier GmbH (ART) drew a thoroughly positive balance for the CHIO Aachen 2016. When the gates close, 348,200 spectators will ultimately have visited the traditional showgrounds at the Aachen Soers over the ten days, “they have celebrated a huge festival,” commented Kemperman. The sporting highlight so far: The emotional victory of the German show-jumping team in the Mercedes-Benz Nations’ Cup on Thursday evening. “A full house, world-class sport, an unforgettable atmosphere – what more could one ask for,” stated Kemperman. The best indication for enthusiastic spectators: The ticket sales for the CHIO Aachen 2017 (July 14th-23rd) are already going extremely well.

This year, the spectators not only experienced world-class sport, but also a high-class supporting programme. For example, the Opening Ceremony was acclaimed to have had a fantastic show character, 90 minutes of turbulent and spectacular entertainment, broadcast live on WDR. Almost 40,000 people watched the CHIO prelude live in the stadium – including the Swedish royal couple, their Majesties Queen Silvia and King Carl XVI Gustaf of Sweden.

Indeed many famous guests also visited the major sporting event. The boss of FC Bayern, Karl-Heinz Rummenigge (“Football has Wembley, equestrian sport has Aachen”) came to the Aachen Soers as well as the Federal Defence Minister, Ursula von der Leyen or TV stars like Simon Helberg (“Howard Wolowitz” from the successful US sitcom “The Big Bang Theory”). The German Sport Aid Foundation used the platform of the CHIO Aachen to confer the most renowned prize in the world of German sport, the Golden Sport Pyramid. Bernhard Langer, Germany’s golfer of the century was awarded the prize. “Aachen has established itself as the `place to be´,” said Michael Mronz.

The almost 120-year tradition also wants to add further successful chapters in other areas. “To this end, we have massively expanded our online activities, particularly in the social media sector,” confirmed Mronz. A totally new concept of working together with bloggers was introduced at the CHIO Aachen 2016 to enable the fans of the CHIO Aachen “a different and new perspective of the event.” In this way, lifestyle and society themes come more under focus. This idea will be further extended in future. Along with other innovative concepts that the CHIO Aachen organisers are developing together with their official technology partner, SAP. For example, in 2016 a very successful tracking app was presented for the first time that allowed the fans to track the athletes in the DHL Prize, the cross-country competition of the eventers, virtually in real-time. And the latest ideas from Aachen for the show-jumping will no doubt also be inspiring.

The CHIO Aachen will come to a close today with the traditional “Farewell to the Nations”. However, prior to that the winners in the two most famous Grand Prix in the world, the Rolex Grand Prix in show jumping and the Deutsche Bank Prize of the dressage riders will be determined. 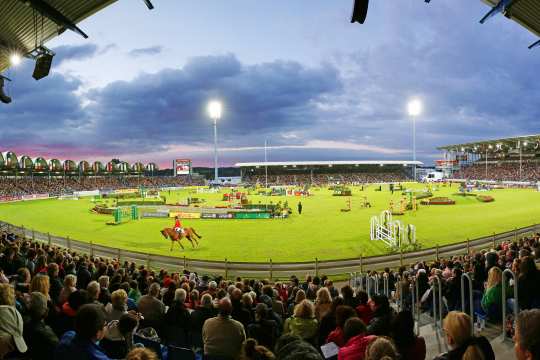