An interview with the national dressage coach about her team for the Lambertz Nations Cup, a full crowd in the Deutsche Bank Stadium and the role of Isabell Werth.

Question: The German dressage squad is traditionally considered to be the favourite to win the dressage at their home game in Aachen. Is that also the case this year?

Monica Theodorescu: Of course, we are always rank as the favourites. But quite honestly: If that weren’t the case, I wouldn’t find it that bad.

Question: Dorothee Schneider is riding her top horse Showtime as an individual rider, Jessica von Bredow-Werndl is only going to be there as a spectator this year because she is pregnant. How do you rate your team’s chances?

Theodorescu: We definitely have a very good team and it is nice for other riders to have the opportunity to be on the team. They are fantastic riders, all of them recently put in strong performances at the German Championships. Now, it is all about making sure each of them is optimally prepared. Of course, I hope we will be able to continue writing our story of success in the Lambertz Nations Cup.

Question: So, you are optimistic after the German Championships?

Theodorescu: Yes, I am very satisfied! Ingrid Klimke and Franziskus alone – the horse has never displayed this consistency before, the two of them really put in three fantastic performances in a row. Or Benni Werndl – we have had our eyes on him for a long time and now he has actually made it. He already has a lot of experience; he has competed in World Cups. Freddi Wandres already performed very well last year and has indeed further improved. They are all riding at a very high level and it is certainly isn’t a no-name squad. The fact that we constantly have horses achieving 80 percent and more is something one shouldn’t take for granted. We are also very spoilt after the results of the past years.

Question: How important is an Isabell Werth, who is able to continually bring out new horses at top global level?

Theodorescu: Isabell is always important for the team. That goes much further than the pure sporting aspect, because she carries the others along with her. But of course: She has another good horse again herself, which still has even more potential.

Question: How nice is to have crowds in the stadiums again and how much are you looking forward to Aachen?

Theodorescu: Well, Aachen still took place somehow, last year with fewer spectators and before that in digital format at least. But, of course, it is totally different to riding in front of empty stands.

Question: Will you have time to take a look around in Aachen and see what is going on?

Theodorescu: I hope so, but I am afraid I won’t get too much of a chance. We start early with the training and always have a lot of German dressage riders competing, not only in the Nations Cup, but also in the CDI and Small Tour. There are a lot of aspiring, young riders there too and I’d like to see how they get on in the Deutsche Bank Stadium. What I do always watch is the Mercedes-Benz Nations Cup of the show-jumpers on Thursday, evening. That is an absolute must.

A strong field of competitors is awaited at the CHIO Aachen in the run-up to the World Championships in August. In addition to Isabell Werth, Cathrine Dufour from Denmark, who is second in the world ranking list behind Bredow-Werndl, is considered to be one of the favourites. Among others, Sweden will be represented by Patrik Kittel, Dinja van Liere from the Netherlands will also be competing. Tickets are available from the hotline on +49-(0)241-917-1111) or directly from the online ticket shop. 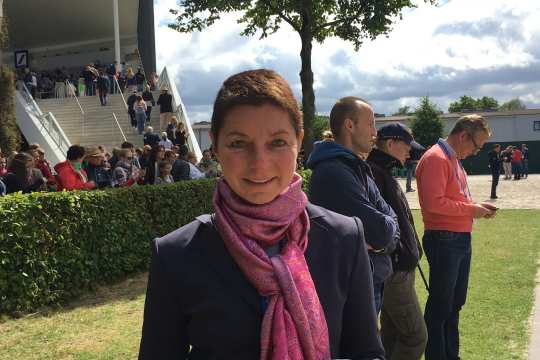