2021 is the year of premieres in Aachen for the dressage rider, Frederic Wandres – he is riding for the German team in the Nations Cup for the first time too and today he headed the field in the Lap of Honour in the Deutsche Bank Stadium for the first time after riding to victory in the WOTAX-Prize.


Frederic Wandres was overjoyed after it became apparent that the 75.176 percent he and Quizmaster received for their performance in the Intermédiaire I, the WOTAX-Prize, was the best result in the competition and thus his first victory in Aachen. “That is indescribable!” he beamed, patting and at the same time calming his nine-year Hanoverian gelding. Since although Quizmaster may appear calm. His rider explained that “he actually always keeps his temperament under control.” Choosing instead to convert it into positive energy for his rider. The appearance here in Aachen is the perfect preparation for the Nuremberg Burg-Cup Final, Wandres reported. “Where else does one have such a star-studded field of competitors? And then this atmosphere on top…”

Second place went to the Dutch dressage rider, Emmelie Scholtens and Indian Rock Platz with a score of 74.441 percent, followed by Matthias Alexander Rath and Thiago GS, who the judges awarded 73.325 percent. 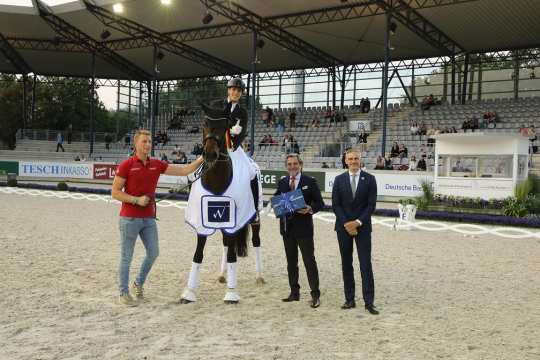