The CHIO Aachen has been the venue for the Final of the German U25 Trophy of the Stiftung Deutscher Spitzenpferdesport, Prize of Family Müter, since 2015. Tim-Uwe Hoffmann succeeded in qualifying for the final for the third time today. But it was the first time he headed the lap of honour at the Soers.

As the last to go in the opening jumping competition of the German U25 Trophy Stiftung of the Stiftung Deutscher Spitzenpferdesport, Prize of Family Müter, Tim-Uwe Hoffmann was able to assert himself against his fellow competitors with his self-trained Hanoverian-bred mare, Casta Lee.

Until the last but one pair entered the ring, the silver medallist of the Ladies German Championships was in the lead, Sophie Hinners with Vittorio. Then, came Jan André Schulze with his ten-year-old Oldenburg-bred Fitch. The 24-year-old from Warendorf and his Flipper d’Elle son already arrived in Aachen in top form, they namely finished sixth in both the Grand Prix at the Nations Cup show in Uggerhalne (DEN) as well as in the Grand Prix in Mons Ghlin (BEL). They paced around the course at the Soers with the corresponding self-confidence and stripped one second off Sophie Hinners and Vittorio’s time. The clock stopped at 68.95 seconds for Schulze Niehues. Sophie Hinners and Vittorio had taken 70 seconds. Now it was Schulze Niehues’ turn to bite his nails. He won the qualifier in Hagen. Tim-Uwe Hoffmann finished first in Mannheim.

“Yes, one is definitely more nervous here than at other shows. And you can’t compare riding into the Soers with anything else,” admitted Hoffmann. “But it is not like I let it really get to me.” On the contrary, Hoffmann had a plan that he stuck to. At the last fence, fortune was on the side of the brave, when Casta Lee lightly brushed the pole, but luckily it didn’t fall: Tim-Uwe Hoffmann and Casta Lee jumped to victory clear in a time of 65.68 seconds, ahead of Jan André Schulze Niehues with Fitch and Sophie Hinners with Vittorio.

In 2017, Tim-Uwe Hoffmann came 21st. He finished eighth in the Final in 2018. We’ll have to wait how he ranks on Saturday. The Final of the German U25 Trophy of the Stiftung Deutscher Spitzenpferdesport, Prize of Family Müter, begins at 1.15 p.m. 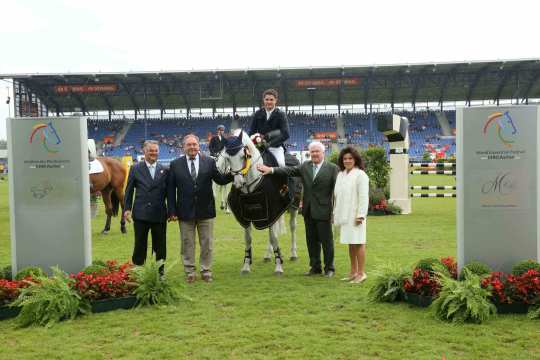