The World Champion, lumbago and an old Rhenish saying

Simone Blum is competing at the “Aachen International Jumping”

In actual fact Simone Blum has every reason not to be in good spirits. Her top horse, Alice, is suffering from lumbago, the World Show Jumping Champion will now be saddling “Cool Hill” for the “Aachen International Jumping”, which starts tomorrow. Blum is nevertheless in a great mood.

Neither the 13-year-old “Alice” nor the ten-year-old “Cool Hill” are the cause of this, but instead seven-month-old Hanna. Simone Blum’s daughter was born in February, “she delights us every day”, the young mother revealed. Hanna is also on board in Aachen.

Simone Blum is looking forward to the “Aachen International Jumping” in spite of Alice’s misfortune: “It is fantastic that the organisers have put such a top event together.” She added that it is clearly five-star level, “the absolute global elite, the crème de la crème are taking part, all of the top riders are here.” This is a great challenge for Simone Blum and “Cool Hill”. The pair claimed the victory in the Grand Prix at the show in Munich and Blum noted “I am eager to see how he presents himself here in Aachen.” She went on to say that he is a fantastic, incredibly talented horse. Like Alice in other words? “Well, perhaps not quite as intelligent as Alice.” It is a good job Cool Hill wasn’t around when she said that. Her top horse suffered the injury to his back on landing after a jump, “I noticed immediately, that something wasn’t right.”

It would have been the first competition for Alice in 12 months. She last competed in Rome in September 2019. After that she had a planned break (pregnancy), followed by an unplanned one due to Corona. In the meantime, Simone’s husband, Hansi, has also suffered a complicated broken foot, “once things start going wrong …,” commented Simone Blum. Her major goal is still Tokyo, the Olympic Games 2021. She had organised everything around the Games, she had even planned the birth of her daughter accordingly. Then, as we all know, everything turned out differently, “of course that is tough,” said Simone Blum continuing that of course the break has in the meantime been extremely long, for the horses and for herself: “Horses like Alice and Cool Hill need the competition atmosphere, the feeling of being at a show simply can’t be simulated at home.” And the rider herself? “I am not really back into the swing of things yet either.” Ultimately though, the rider from Bavaria summed up the situation with a very Rhenish old wisdom: “Meanwhile, we have all learnt to simply take things as they come.”

Before the World Champion enters the ring from tomorrow onwards, the Show Director, Frank Kemperman, acquainted her with the somewhat unfamiliar Aachen terrain – because the top 50 international riders and 25 of the best Young Riders will be competing in the Deutsche Bank Stadium, the home of the dressage riders during the CHIO Aachen. Simone Blum is taking the many hygiene measures with a pinch of salt, “we are incredibly lucky in the current situation that we are allowed to pursue our sport at all.”

300 spectators are permitted on each of the three show days, all of whom will be seated at large distances from each other. There are two empty seats in between two vacated seats, every second row will be left empty as well as all outside seats of a row. Disinfectant dispensers will be located at each staircase, there are separate entrances and exits to the stadium. Furthermore, the spectator area is completely separated off from that of the athletes and employees, there are also separate access points. “Of course, there are major restrictions, but everyone has complete understanding for the extensive measures,” reported Frank Kemperman. And his eyes lit up over his mask when he added: “The main thing is that the horses are finally back at the Soers again.”

All infos on the programme and TV times. 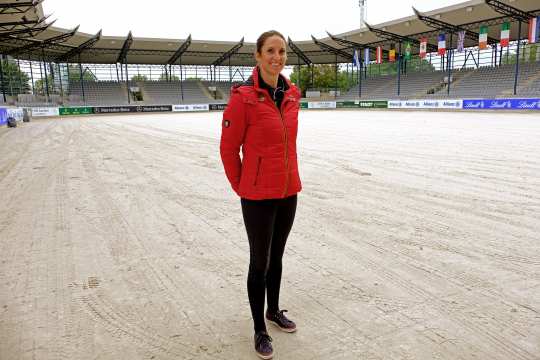