Emmelie Scholten’s and her stallion Desperado were the last of ten pairs to compete in the Grand Prix Freestyle (CDI4*) under floodlights this evening and finished first.

Until then, Dorothee Schneider and Sammy Davis Jr. had been heading the field with their tango freestyle routine. The judges had awarded the team European Champion of 2017 a score of 81.210 percent. However, the Dutch rider Emmelie Scholtens and her 13-year-old Vivaldi son, Desperado, who won team silver at the European Championships in 2019, put in a dazzling performance that was rewarded with a score of 83.110 percent.

Emmelie, who is currently expecting her first child, was elated: “Unbelievable! I really wanted to perform well today and everything went perfectly,” she reported, still out of breath. She was particularly delighted that her stallion had done such a good job. “He is such a sweet horse!”

Dorothee Schneider came second with Sammy Davis Jr., followed by the Spanish rider José Antonio Garcia Mena with his Westphalian-bred horse, Sorento, with whom Isabell Werth once made a big appearance in the Horse & Symphony concert. The pair received a score of 79.440 percent for their performance in the Deutsche Bank Stadium today. 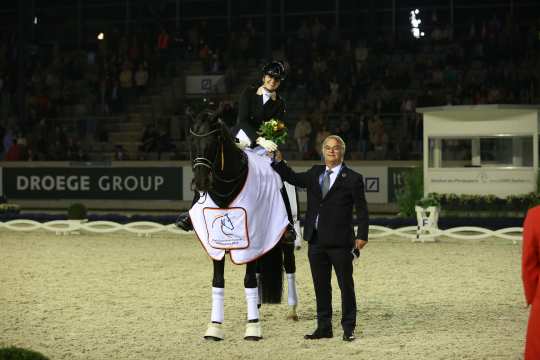