The four-in-hand driving King, Boyd Exell, had no intention of letting anyone else win the Prize of the Martello Immobilienmanagement GmbH & Co. KG, the Dutch drivers are heading the field in the Nations’ Cup

Anyone, who wants to win the Prize of the Richard Talbot family, in other words the individual classification of the Nations‘ Cup of the Four-in-Hand Drivers, has to first beat Boyd Exell. And the nation that wants to win the team classification, has to beat the Dutch. Both tasks are proving to be extremely difficult this year. Especially, since the German drivers only got off to a mediocre start in the dressage, the Prize of the Martello Immobilienmanagement GmbH & Co. KG.


Boyd Exell already claimed the victory in the warm-up round of the drivers. Today, in the Prize of the Martello Immobilienmanagement GmbH & Co. KG, the first competition in the Nations’ Cup of the Four-in-Hand Drivers and the individual classification in the Prize of the Richard Talbot Family, raised the bar even higher. The Australian driver, who lives in the Netherlands, once again secured the victory in the dressage with his team on a score of 37.99 minus points. Exell, who is undefeated so far this season, is well-known for proving that he is in a class of his own in all three driving disciplines…

The Dutch have already won the Nation’s Cup in driving 14 times at the CHIO Aachen. They haven’t been beaten since 2008. And after the dressage at least, it certainly doesn’t look like things are going to change this year either. They head the field on an overall interim score of 95.090 minus points, ahead of France (103.950) and Belgium (108.430).

The German team is currently placed fifth with an overall score of 111.30 minus points. Mareike Harm, obtained the best result in the dressage today after finishing seventh, (49.97). However, she is not competing for the team. The three team members Michael Brauchle, Christoph Sandmann and Georg von Stein ranked 17th, 9th and 13th, respectively. However, their strengths particularly lie in the Marathon and cone driving. Skills that they will be able to demonstrate in the XXXL Pallen Marathon and the Prize of the Heitkamp & Thumann Group on Saturday and Sunday. 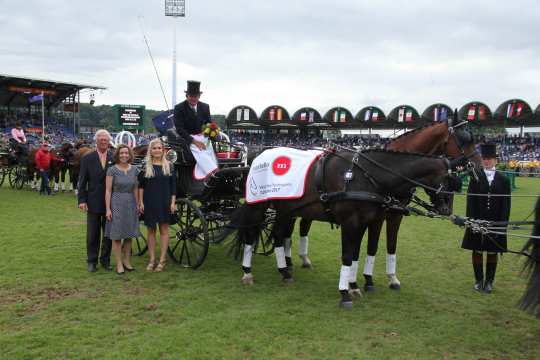