The first horses arrive – event kicks off with vaulting

The CHIO Aachen 2016 gets underway on Friday. The first weekend is dedicated to vaulting, which shows top acrobatic performances on horseback at four star level in the Prize of the Sparkasse. Even though guests from more than ten nations are awaited, the German athletes are considered to be the top favourites in all of the competitions.

Whilst the first horses are arriving outside, the preparations in the Albert-Vahle Arena, where the vaulting competitions will be staged from July 8th-10th, are almost finished. The around 40 volunteers have done fantastic work: The vaulting circle has been set up, turf has been laid around it, decorative flowers have been placed around the perimeter and they have been watered. The warm-up area and the entry office have been prepared. The technicians are currently laying the final cables and connecting up the big video screen. Then, everything is ready for the two and four-legged athletes. They will already encounter top conditions for first-class sport when the training starts on Thursday morning.

After the horses have passed the vet check, which begins at 3 p.m. on Thursday afternoon, to confirm that they are fit to compete, the competitions will kick off on Friday morning for the ladies, men’s and group vaulting classifications. The participants in the Pas-de-Deux are the only vaulters, who won’t be competing until Saturday. The competitions are divided up into three different parts, which are staged on different days. In the compulsory test, pre-defined exercises have to be performed in a set order. The vaulters have a little more freedom of choice in the technical test that is one of the competitions in the ladies and men’s individual classifications. Here, a freestyle routine based on a freely chosen theme is presented, whereby the six compulsory elements have to be integrated into the choreography in random order. In the case of the freestyle competition, the horseback acrobats can put their programme together at will, here almost anything is allowed.

The German competitors are considered to be the favourites in all four categories. Thomas Brüsewitz, Jannis Drewell, Jannik Heiland and Daniel Kaiser will be representing Germany in the men’s individual competition, the Prize of the Sparkasse. They have all already proven that they are more than capable of winning. Jannis Drewell claimed the European Championship title at the same place just over a year ago. The strongest rivals in the men’s competitions are from France and Austria. In the ladies individual classification, a close eye has to be kept on the competitors from Great Britain and Switzerland. But the German female vaulters Kristina Boe, Janika Derks, Sarah Kay and Corinna Knauf are all candidates for a place on the winners’ rostrum.

After the title-holders, RSV Neuss-Grimmlinghausen, had to withdraw from the competition, there is going to be a special kind of premiere among the vaulting groups: For the first time ever, two groups from one club will be representing Germany in the vaulting circle at the CHIO Aachen – Group I and II of VV Köln-Dünnwald. The group from France is their strongest rival. In the Pas-de-Deux, everything is open, it is going to be very exciting here, because the three German pairs Bresch/Jacobs, Derks/Kay and Ossenberg-Engels/Gerdes, will all be competing against each other for the first time. The two pairs from Austria could be a big threat, indeed Csandl/Thiel are the current title-holders. Not to forget the experienced Pas-de-Deux duo Palmer/Palmer from the USA, who more or less honour the CHIO Aachen with their presence every year as permanent guests.

The highlight of the vaulting weekend is the Prize of the Sparkasse Nations’ Cup on Sunday afternoon. Only the best athletes from the day before qualify to compete here. The mode for the Nations’ Cup, this “Aachen Invention”, is unique: One man, one lady and a vaulting group form a team. The vaulting competitions on Saturday and Sunday in the Albert-Vahle Arena, which holds a capacity of 1,100 spectators, are already sold out, tickets are still available for the Friday. 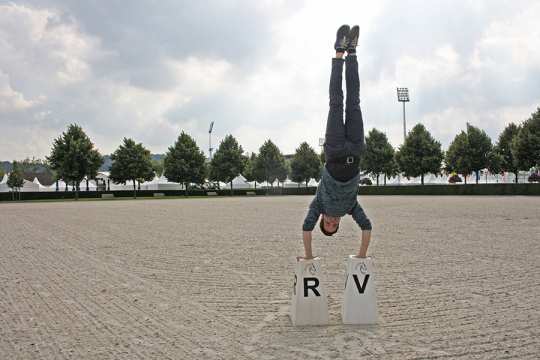