The crowd were the decision-makers: Mettmann District Association wins the Prize of Handwerk

That is a good idea for the international classes in the Deutsche Bank Stadium! Because the judges couldn’t decide which quadrille was better in the Prize of Handwerk, that of the District Association of Aachen or Mettmann, the crowd were called upon to applaud loudly for the team they found best. And that went in favour of the quartet from Mettmann.

The Mettmann District Association under the direction of the team leader, Elke Buddenberg, was represented by the riders Jule-Marie Ditthardt with Rock Soleil, Vera Haug with Tenterhofs Hofmeister, Emely Schermuck with Fidlerniro and Lisa Malin Schöning with Lukas. Dressed in glittering tailcoats and under the CHIO 2022 motto “Welcome to the Festival”, the four riders celebrated a top-class quadrille, which was perfectly executed. “The level of difficulty was extremely high and the quality of the execution fantastic,” raved the judge Christof Umbach, who judges at Grand Prix level.

However, he and his colleagues had said beforehand that the quadrille by the Aachen District Association had “flashed” them with their performance and had awarded them a score of 97.50 percent. “Should they place the team from Mettmann behind them or in front of them? “We have decided we are going to award them the same score and let you decide,” announced Umbach. The riders were in agreement. The applause from the crowded stands for the group from Aachen was loud, very loud. But it was absolutely thunderous for the crew from Mettmann. And so, the decision had fallen, which was also confirmed by the spectator judging: The score from the crowd for the riders from Mettmann was 98 percent.

Aachen came second. Under the direction of Elke Braun, among other to melodies from Bon Jovi and The Final Countdown, the team comprised of Janine Cremer with Shades of May, Claudia Effertz with Sir Sasse, Iris Herren with Fiderella and Tanja Hinrichs with Laurina.

Third place went to Neuss District Association presented by Anja Mede and her riders Lea Haß with Blind Date O, Anke Roeb with First Silvano, Sabrina Stocks with Pica d’or and Kea-Alexa Wiemer with HA Locarno. They too scored over 90 percent – 92.5 percent to be precise.

The team from Neuss, which had selected Queen as their motto, were all dressed up as Freddy Mercury and were awarded the special prize for the best costume and can thus visit the CHIO Aachen as a group in 2023, because they won ten free tickets. 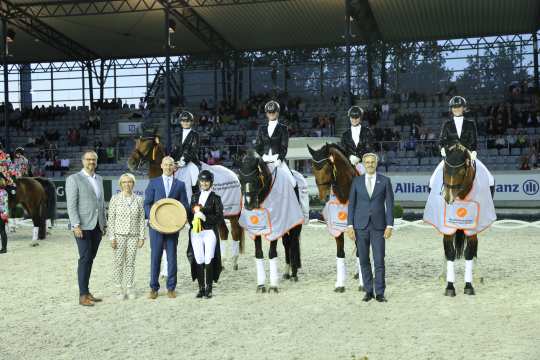