Helen Langehanenberg is familiar with that feeling when the German national anthem is played for her in the Deutsche Bank Stadium in Aachen. She experienced it often enough with Damon Hill. However, she was simply speechless when it happened again today. And it brought not only tears to her eyes.

Helen Langehanenberg is back in the fast lane in the dressage arena, admittedly not just since today. But as she said herself: “Winning in Aachen is always something very special!” Her new horse for the big tours is the Hanoverian-bred stallion, Damsey FRH. She has been riding the Dressage Royal son for a year and a half. Since then they have continually improved, “with a few ups and downs,” as the rider commented, but always with an upward trend. Today, is the crowning glory so far. Or to put in the words of Damsey’s American owner, Louise Leatherdale – who also had to contain her tears – “This was perfection!”

Indeed, the Team World Champion and the elegant dark bay stallion delivered a wonderfully, harmonious ride, without any mistakes and full of esprit. The judges awarded the pair a score of 75.9 percent. The Olympic gold-medallist, Heike Kemmer, called over to Helen as she walked by: “I would have given you 78 percent!” The rider herself was in the meantime as good as speechless. Her cheeks were shining. “I came here with the intention of riding to win. And he played along so well and fought so hard for me… I am so proud of him and how we have come together so well!” The next goal is obvious: To deliver a similar performance again on Friday in the Grand Prix Spécial, the Lindt Prize.

Langehanenberg’s victory was all the more significant, because she relegated the dressage queen personally into second place: Isabell Werth with the Westphalian-bred Emilio. Whereby the six-time Olympic gold-medallist made extremely costly mistakes in both the two-tempi and one-tempi flying changes. As a result, the pair who are so used to victory, had to make do with second place. The unbiased members of the judging panel awarded the pair a score of 75.040 percent.

The Danish rider, Anna Kasprzak, was delighted at coming third with a score of 74.320 percent. Not only because of the placing, but also because her in the meantime 18-year-old Donnerhall son celebrated a come-back here in Aachen after a long period of injury. He had to have several teeth taken out. Now he is back again. And in what form! Donnperignon seems to be rather like a red wine – the more mature the better! 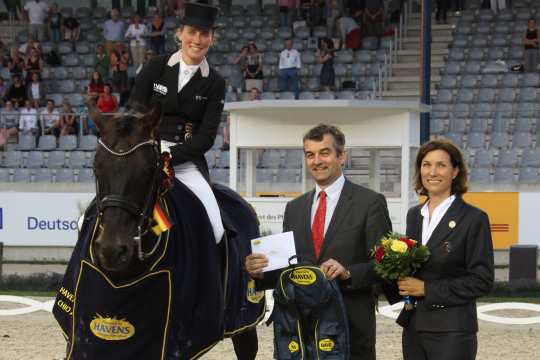