Start-finish-victory for the British team and an historical win for the rider from the USA, William Coleman

The visitors at the Soers enjoyed top sport on Saturday morning. The cross-country was on the agenda for the eventers in the SAP-Cup today. The British riders were able to confirm their current supremacy and William Coleman from the USA made the statisticians happy.

The sponsors of the competition, SAP, have namely developed the SAP Prediction Centre together with Equi Ratings, which calculates the probability of the winners based on historical results. And as is well known the figures don’t lie. The system predicted the 26-percent probability of William Coleman winning. That was the highest probability of all participants and it proved dead on. The time decided the ranking today. Coleman was the fastest in the cross and that enabled him to move up from third place after the dressage and jumping to the top of the field. His is thus the first eventer from the USA to win the SAP-Cup since its inception in 2007. His name will thus be eternalised on the Winner’s Board at the entrance of the Main Stadium. A very special feeling: “The names on the winners’ board are the best in our sport. I consider myself very lucky to be up there with them. I am totally overwhelmed!”

Incidentally, Coleman has a rather special relationship to his horse, the magnificent Irish Sports Horse, Off the Record, as he explained: “Off the Record is unique. Some days you get him out of the stable and he is like a kitchen table. A kitchen table with turbo engines. His effort is what makes him so special. It took me time to figure that out. We have a good relationship now, but when he is full of energy, he is difficult, he can buck and rear, but because he is so highly strung it is the way it comes out, but he is not malicious. Figuring that out has helped us.” And no doubt also the fact that the gelding has found the cross as a valve for his turbo engine, which he demonstrated once again today.

The victorious British team comprised of two newcomers to Aachen, Emilie Chandler riding Gortfadda Diamond (“I didn’t really know what awaited me in Aachen, but my expectations were exceeded in every respect.”) and Kirsty Chabert with Classic VI as well as two pairs with plenty of experience at the Soers, Laura Collett and above all Zara Tindall, who claimed the World Championship title here in 2006. Collett opted for Mr. Bass for the team and also had a second iron in the fire with Dacapo. Zara Tindall had saddled the twelve-year-old Irish Sports Horse, Class Affair.

The individual results underline how well the British riders performed as a team: Emilie Chandler and Gortfadda Diamond finished third, Collett and Mr. Bass came fourth (furthermore, with her second horse, Dacapo, the team Olympic gold medallist ranked second in the individual classification). Zara Tindall and Class Affair worked their way up to 18th place after the cross. And Kirsty Chabert who was the overnight leader in the overall classification and thus set off as the last rider on the track, looked like she was going to be the only rider to finish within the time, until Obstacle 22, where she had a run-out with Classic VI at the STAWAG complex, incidentally one of just three today. As such, the pair delivered the scratch result for the team after finishing 23rd.

William Coleman’s heroic round together with the tenth place of Tamra Smith with Mai Baum and 16th place of Ariel Grald with Leamore Master Plan secured the USA second place in the team ranking. Sydney Eliott was the scratch result for the team with QC Diamantaire (26th place).

The German team finished fifth. Andreas Ostholt and Corvette, who also claimed fifth place in the individual classification, was the best German rider.

The Course Designer, Rüdiger Schwarz, was satisfied with the day. His strategy paid off. “There are three things that are important to me: That we see exciting sport, that the best riders top the ranks and that nothing happens. That worked well today.” 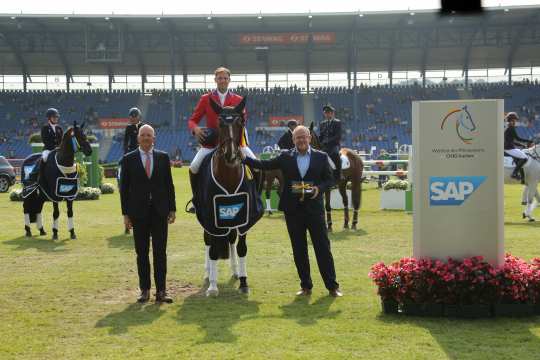