Born in Brazil, discovered in the USA, victory in Aachen – that is the short version of the success story of Yuri Mansur’s grey mare, Havana M. Today the pair celebrated their hitherto biggest victory in the second class of the Sparkassen-Youngsters-Cup 2018.

Yuri Mansur risked all today in the Sparkassen-Youngsters-Cup at the CHIO Aachen 2018. He has competed at shows with his mare, Havana M, nine times to-date and she jumped clear in all nine. So, it was time to put it to the test. And that is precisely what the Brazilian rider did – selecting the shortest routes he only had one strategy today: Riding forwards! As Havana M flew over the finish line, the clock stopped at 62.91 seconds and Mansur was able to put a tick behind clear round number 10 as well as taking the lead, which he clung on to until the very end because nobody was able to catch him.

The pair won the competition, ahead of Marcus Ehning with the Westphalian-bred For Contest daughter, Mill Creek Filippa K – who incidentally already came third in round one on Tuesday – and Laura Kraut (USA) riding SFS Vincomte by Veni Vidi Vici. Fourth place was claimed by the winning pair from the first round, Daniel Deußer with Killer Queen. He was followed by Christian Ahlmann with the Westphalian-bred Cornado son, Cornwell.

Yuri Mansur discovered Havana M in an amateur’s jumping class in the USA. He did some research and found out that she was born in his home country, Brazil, and that she belonged to a friend of his. He bought the mare. Originally with the intention of selling her on pretty quickly. “But now she has jumped 10 clear rounds out of ten. She is getter more expensive all the time… Havana M has thus earned herself the right to stay a while with the Brazilian rider, who lives in the Netherlands.

Yuri Mansur fell yesterday with the stallion Vitiki during the jump-off of the Turkish Airlines Prize of Europe and the horse had to be brought to the clinic with an injury to his pastern. In the meantime, we have been updated on his state of health. Vitiki was successfully operated on today and has his leg in plaster so that it can heal. 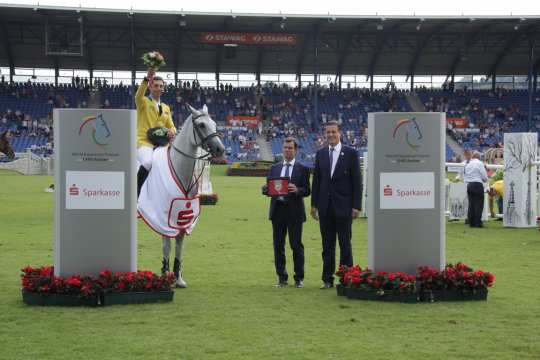