14 years in-between a victory in Aachen

Somehow or other it has to be a special occasion for Chris Pratt from Canada to compete in Aachen. The last time he came was 14 years ago for the World Equestrian Games in 2006 – he has made his way here again now for the Aachen International Jumping. With success: He rode to victory in the Sparkassen-Youngsters-Cup on Saturday.

In the saddle of Newberry Balia, he took 58.74 seconds to complete the course designed by Frank Rothenberger and was thus a good second faster than Laura Klaphake with Concollon PS. Richard Vogel finished third with Stardust Degli Assi – the latter combination also picked up the winning rosette in the opening round on Friday.

The Aachen International Jumping is the first ever show together for Chris Pratt and the mare Newberry Balia. So, it is pretty obvious that he finds it “great” to be back in Aachen after 14 years. He stated that the conditions in the Deutsche Bank Stadium are super, “and the entire atmosphere here is simply incredible.” Tomorrow he will be competing in the Allianz Prize with his experienced horse, Cocobongo, “I hope just as successfully as today.” 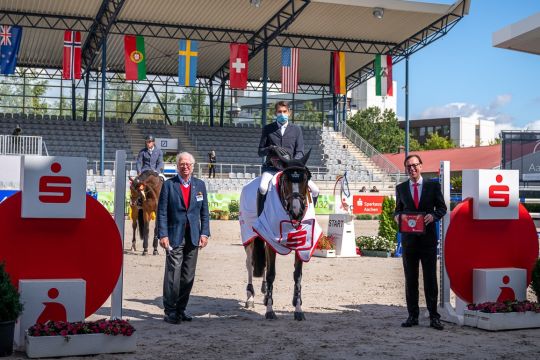