The most important jumping class at the Aachen Soers today was the Allianz-Prize, a jumping competition with a winning round, which the best ten pairs qualified for. How to master the tasks set by the Course Designer, Frank Rothenberger best? Ask Scott Brash!

Because the British rider and his twelve-year-old Zangersheide stallion, Hello Vincent, were not only the fastest clear round in the winning round in a time of 53.84 seconds, but in fact the fastest pair overall.

His summary: “It was an amazing class today not as big as yesterday, it was very well built, very sensible. Ten clears today and the top ten qualified for the jump-off, so the course builder was exactly on target.” However, the course certainly wasn’t a walk in the park. “. It is never a walk in the park in Aachen,” stated Brash.

Where he made up the time? “I think I tried to keep it as quick, smooth and rhythmic as I could. I rode quite tight to the oxer. It felt good. I wouldn’t say there was one specific place, where I made up time, I just rode as fast and smooth as I could, he’s quick through the air too, which also helps.” So, that’s how it is done.

Christian Ahlmann came second with Dominator Z, who crossed the finish line in a time of 54.23 seconds. For the eleven-year-old Zangersheide stallion, who alongside his sporting career is also a popular stud stallion, Aachen is the first show after a long time-out: “I am delighted, of course, I would have preferred to have won. This was the first sporting performance of Dominator because he’s sustained an injury. This is his third show and he is performing well, he did a good job in the jump-off. He was very concentrated. It was a great feeling having him back on board again.”

He was followed in third place by the Irish rider, Darragh Kenny with the Belgian-bred Idalville d’Esprit. The clock stopped at 54.68 seconds for the pair. Like his fellow colleagues, Darragh Kenny was delighted to compete in Aachen again in front of a crowd. 33,000 visitors came to the Soers today. The Show Director, Frank Kemperman, stated: “That is not the target we normally set ourselves in Aachen, but a good result under the circumstances.” Scott Brash: “I really noticed the people during the prize-giving ceremony, it was lovely to have them back again. Slowly but surely.” 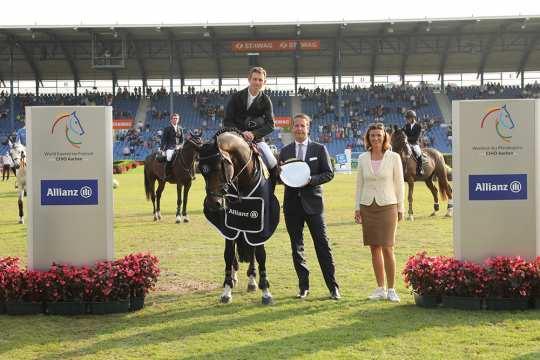