SAP Prize goes to the USA

The reigning World Cup winner, Ward and his 15-year-old Zangersheide-bred gelding, HH Carlos & by Chellano Z, crossed the finish line in a time of 60.21 seconds and no other pair were able to match it. Even if Felix Hassmann and the 12-year-old Brazilian-bred grey horse SL Brazonado by SL Baluarte did their very best. The clock stopped at 60.80. Third place went to the rider from Chile, Samuel Parot, with a further product of the Zangersheide Stud Book: Atlantis by Andiamo (61.60 seconds).

The winner commented after his ride: “I was the eighth to go in this competition. But it wasn’t particularly a disadvantage for me to be to be one of the first riders, because Carlos is such an experienced and fast horse that I didn’t have to watch the others. He is 15 years old, but he is in great shape. This year I won six world ranking classes in Calgary with him as well as the Grand Prix of Falsterbo. I will also be riding him at the CSIO Dublin next week. I am happy to have won this competition and I hope my luck continues.” 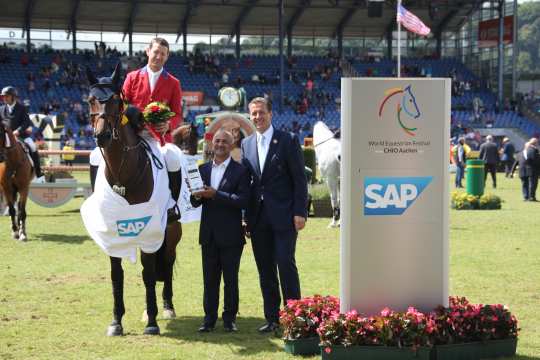