Before the fences get really high and wide this afternoon in the Rolex Grand Prix, the visitors were able to applaud the rider from the USA, Lillie Keenan, for her victory in the SAP-Prize.

1.45-meter fences against the clock, that is the principle of the SAP-Prize on Sunday. And when it comes down to speed, the US rider always heads the ranks. This time she finished first and third.

Lillie Keenan flew to the finish line with her ten-year-old Zangersheide stallion, Agana van het Gerendal Z, in a time of 57.43 seconds. She already proved she can ride fast yesterday when she won the porta-Cup together with the Australian eventer, Andrew Hoy and the four-in-hand driver, Boyd Exell. “I think every ride in the stadium in Aachen is an exceptional experience but to actually win is the best feeling ever!”

The winner of Wednesday’s class, the Prize of Handwerk, the Brazilian rider, Felipe Amaral came second with Germanico T (57.84). First time in Aachen, two victories – not a bad record for him!

A further young rider from the USA came third, namely the recently crowned winner of the Mercedes-Benz Nations Cup, Lucy Deslaurier, who had saddled her KWPN mare, Enanda. The clock stopped at 58.11 seconds for the pair. 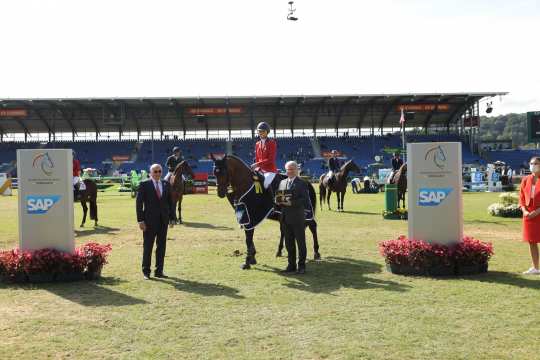