Anyone, who meets Roger-Yves Bost this evening at the Aachen Soers, is bound to encounter a beaming smile. Namely this afternoon, the French show-jumper won the Prize of AachenMünchener at the CHIO Aachen, the most important equestrian show in the world. He was one of the 13 riders to reach the Winning Round. 20 further fellow competitors had given this a shot too. Bost – or “Bosty”, as his colleagues call the likeable European Champion of 2013 – had saddled the French stallion, Pegase de Murier. The grey stallion did his name all justice and left the rest of the field trailing behind after reaching the finish line in 44.94 seconds.

Roger-Yves Bost was overjoyed with his Saturday at the CHIO: “I have won so many competitions in Aachen, but never the Prize of AachenMünchener. I am delighted that I succeeded in doing so this time, because there are always a lot of spectators on the Saturday and that makes it is even more fun winning!” Her raved about his stallion: “Pegase de Murier is incredibly talented – extremely careful, can jump everything and is at the same time fast too.” Bosty hasn’t been riding the stallion for long. He has the feeling that the stallion gets better and better. The French rider hopes he will advance into become a horse for Grand Prix in the future too.

The prize-giving ceremony today, at which as always the national anthem of the winning nation was played, was for a different reason also highly emotional for Bost and his fellow countrymen: “After the terrorist attack in Nice, it means a lot to us to hear the Marseillaise. All of the French riders are wearing black armbands, because we want to show our compassion and that we are proud to be French.” 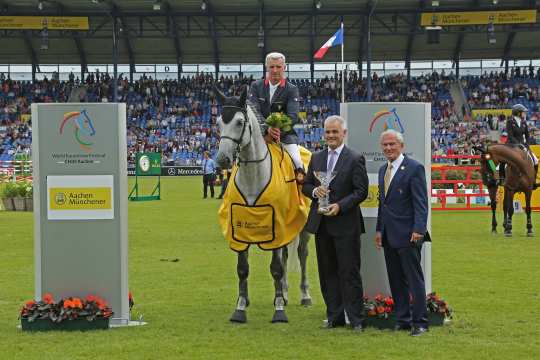