Ouch! That hurt! The show-jumper Janne-Friederike Meyer-Zimmermann is playing a flute, her colleague Laura Klaphake is banging away on a mini organ and the eventing stars Sandra Auffarth and Bettina Hoy are having a go on a harmonica and a xylophone. When equestrian sport meets music, it doesn’t necessarily have to be quite as weird as in this humurous CHIO Aachen video. The best example: The “Horse & Symphony” concert, when fantastic music meets fantastic equestrian sport on the first weekend of the CHIO. There is going to be an exciting combination between show and sport accompanied by the live music of the Aachen Symphony Orchestra on two evenings (July 13th and 14th, starting at 8.30 p.m.).

So a little bit of “Horse & Symphony” atmosphere was noticeable when the organisers presented this year’s programme on Monday afternoon. Short video clips reminded the participants of big moments of past years and in the Deutsche Bank Stadium a proud horse and rider did their rounds accompanied by the dancers of the Ferberberg Ballet School. “Horse and Symphony”, explained Carl Meulenbergh, President of the organising company, Aachen-Laurensberger Rennvereins e.V. (ALRV) “this stands for very special moments, simply a very spectacular prelude to the CHIO Aachen.”

This is due to both the music and the programme, which is going to be fast-paced, spectacular, enchanting and mystic, because the motto of 2018 is: “Mystical – fairytales, myths and heroes”. The Show Director, Frank Kemperman, doesn’t want to reveal everything that awaits the spectators yet, but Shetland ponies in front of sulkies will be on the agenda as well as the proud Arabian horses from the Ismer Stud. The quadrille group of the Aachen District Association will perform to music from the Harry Potter films and the world-class vaulters from Team Neuss to “Alice in Wonderland“. A true French superstar has also confirmed her participation, Alizée Froment – she will be accompanied by the conductor Justus Thorau on the piano.

“That is of course also a real climax for me,” stated Thorau about his joint performance with the world-class rider. Sitting in the middle of the arena, playing the piano to a crowd of several thousand people, “is not something I do every day.” He will spend the rest of the evening at the conductor’s stand to master the Horse & Symphony “challenge”. The event is the most comparable to ballet, where it is also important to keep an eye on what is happening on the stage to make sure the programme and the music remain in sync. “It is quite simply a very special evening, for us musicians too,” remarked Justus Thorau.

This year there are actually going to be two such special evenings, whereby the Saturday evening was already sold-out at a very early stage. There are still sufficient tickets for Friday, July 13th, 2018. The concert begins at 8.30 p.m., tickets can be ordered online or from the hotline on +49-(0)241-917-1111. 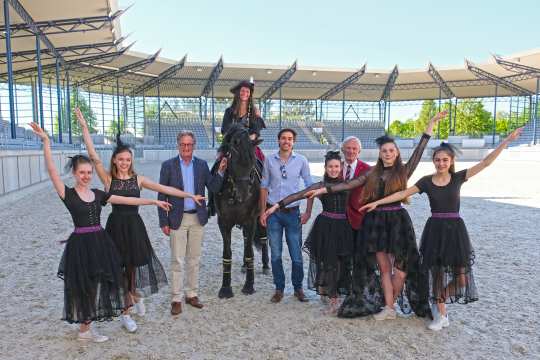