Sergio Moron Basoco was the name of the winner in the Prize of the Liselott and Klaus Rheinberger Foundation, the dressage competition for Young Riders at the CHIO Aachen.

Sergio Moron Basoco and Farnham L – those who don’t know the pair yet, should watch out for them in the future. The 20-year-old Spanish rider and his Danish-bred Fürst Rousseau son have already experienced a lot together, have already competed at the European Championships for the Juniors and Young Riders twice, most recently in 2021 in Oliva Nova, where they came fourth in the individual classification and the freestyle. Today, they topped the rankings at the CHIO Aachen. The pair secured themselves the victory with a score of 73.970 percent ahead of the Belgian dressage rider, Amber van den Steen with Fame (73.588) and Germany’s Moritz Treffinger with Treffinger‘s Superstition (72.794).

After the prize-giving ceremony, an overwhelmed Sergio, who lives in Barcelona and who originally wanted to become a show-jumper, said, “I competed here last year already (Fifth place in the individual, third in the freestyle). It is incredible being able to ride here. But to actually win is incredible, simply incredible!”

Moritz Treffinger was of the same opinion, whereby he enjoyed a home advantage, since he is one of the candidates of the CHIO Aachen CAMPUS Programme of Excellence and was able to train at the Soers with Isabell Werth. So, although he was also competing at the CHIO for the first time, he said, “I felt quite at home here.” But competing in the Deutsche Bank Stadium is of course something else. “It was simply mega to ride here.” He has profited from the CHIO Aachen CAMPUS Programme of Excellence in many ways: “Through the training with Isabell Werth of course, that goes without saying. But also from all of the workshops that are offered in the scope of the programme!” 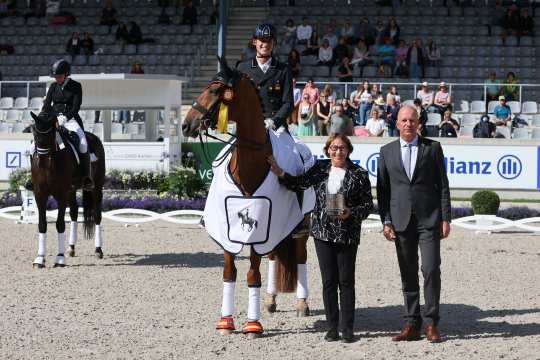 Congratulating the winner (from left): Dr. Evi Eisenhardt , Member of the Board of the Liselott and Klaus Rheinberger Foundation, and ALRV Supervisory Board Member Jürgen Petershagen Photo: CHIO Aachen/ Michael Strauch