The CHIO Aachen is one of the few shows that still stages a real hunting competition. The course in the Prize of Soers leads through the pond in the Main Stadium, over ditches and banks and 1.45-metre-high obstacles. The class even attracted the eventer Sandra Auffarth. But at the end of the day, a show-jumper crossed the finish line first.

Belgium’s Wilm Vermeir and his eleven-year-old BWP-mare, Linguini de la Pomme, already won the Prize of Handwerk on Wednesday. Today, they also triumphed in the hunting class, the Prize of Soers with a clear round in 60.74 seconds, ahead of Jur Vrieling (NED) with Chabada de l’Esques by Quebracho Semilly (60.98) and Yuri Mansur (BRA) with his Diamant de Semilly son, Away Semilly (64.12).

The only eventer, who took part in the competition, Sandra Auffarth, came fifth with her Derby mare, La Vista.

Wilm Vermeir, who is making his debut here in Aachen this year, is without doubt delighted with his performances at the CHIO so far. In addition to the above-mentioned victories, he also came second with the Belgian team in the Mercedes-Benz Nations Cup. 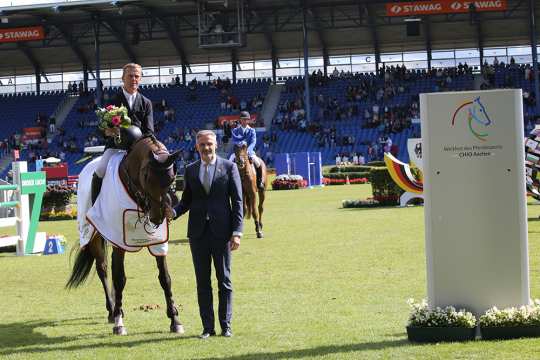