Darragh Kenny – “I am always lucky in Aachen!”

He is riding here in Aachen for the second time, but his number of victories is much higher: The Irish show-jumper, Darragh Kenny, who cantered to victory in the Prize of Handwerk.

The Irish rider, Darragh Kenny’s first and hitherto only CHIO Aachen visit was quite a while ago: He paced around the course at the Aachen Soers the last time in 2014. His end result back then: three victories. The festive Opening Ceremony of the CHIO 2018 is not yet 24 hours ago, and Kenny has already won his fourth golden rosette. In the saddle of the nine-year-old Cacan, he reached the finish line nearly two seconds faster than his fellow competitors in the Prize of Handwerk. “I am always lucky here,” the Irish show-jumper beamed. Whereby it is only the second show in Aachen for him and Cacan. The latter compensated for his lacking experience with his jumping scope: “He really is a super horse!”

The same also applies for the runners-up. Second place went to the Selle Français mare, Venise du Reverdy, under the Egyptian rider, Abdel Said, who lives in Belgium. The Holstein-bred mare Star finished third with the French rider, Thierry Rozier. The recently crowned double European Champion, who is competing here under the flag of the Rolex Academy, Harry Charles claimed the second placing in his career at the CHIO Aachen after coming fourth with Controe. Fifth and sixth place in the prize-giving ceremony were secured respectively by the Brazilian rider, Pedro Veniss with For Felicila and Sweden’s Henrik von Eckermann with Que Guapo de Hus Z, who was also placed in the STAWAG Opening Jumping. 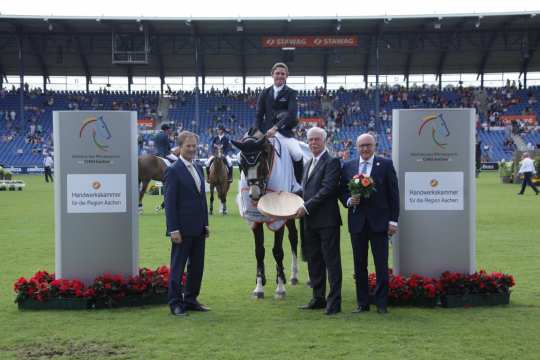