Prize of Handwerk: The last ones shall be the first

Ireland’s Darragh Kenny was the last to go in the Prize of Handwerk with his speedy black steed, Cazador LS, and the pair went on to claim the victory – to the disappointment of André Thieme.

It had seemed like the rider from Mecklenburg, André Thieme, was sure to win the Prize of Handwerk. It would have been the first golden rosette at the Aachen Soers in his career. He was the third last to compete in the 1.45-metre-high speed competition with his Cellestial-son, Cellisto. Up until then, the Swiss show-jumper, Pius Schwizer was in the lead with Grand Cooper after jumping clear in a time of 66.63 seconds. When it was Thieme’s turn, 45 pairs had already tried in vain to overtake the Swiss rider. Then, Thieme and Cellisto entered the ring: Rhythmically and efficiently they strided over the course. The 13-year-old Brandenburg-bred DSP gelding is a talented jumper and Cellisto’s scopey canter did the rest. As the pair flew over the finish line after the last oxer clear three hundredths of a second faster than Schwizer, the audience already began to applaud Thieme loudly as the winner of the competition.

But no jumping class has actually been won, if the speedy Irish riders haven’t yet had their turn. Especially since Darragh Kenny had several advantages going for him: He was namely already able to win the Prize of Handwerk in 2018. What’s more, he was riding a horse that he describes as his speed specialist, the 11-year-old Casall-son, Cazador LS. “He already won the 1.45-metre-high speed class in Calgary. I knew he’d love this stadium,” said Kenny. Because Calgary (or Spruce Meadows), the second open-air venue of the Rolex Grand Slam after Aachen, also has a spacious grass arena. Darragh Kenny was proven right. The black gelding literally flew round the course and sliced over three seconds of Thieme’s and Cellisto’s time. That safely secured him the victory. André Thieme finished second with Cellisto, followed by Pius Schwizer and Grand Cooper.

André Thieme was quick to answer whether he was more overjoyed about coming second or more disappointed at not winning: “More disappointed!” He was nevertheless also very pleased: “That was my first round here and it was a fantastic prelude! That’s how it can continue!” Something that is not improbable at all. Cellisto is Thieme’s speed horse this weekend. He has planned Aretino for the Big Tour and perhaps he will be able to celebrate his first CHIO rosette after all! 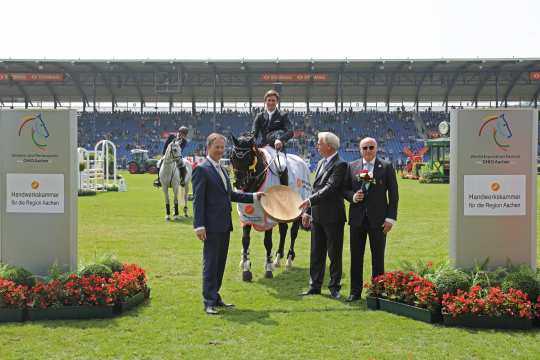