The equestrian sport fans know as soon as a jump-off is on the agenda: Things get exciting! And that is exactly what happened in the first jumping competition of the Large Tour at the Aachen International Jumping. Philipp Weishaupt accomplished the fastest clear round with "Coby". He completed the course two seconds faster than Eric Lamaze and Laura Kraut.

What a star-studded, first jump-off at the Aachen International Jumping: Marcus Ehning, Christian Ahlmann, Scott Brash, Gregory Whatelet – several Rolex Grand Prix winners were on board in the Deutsche Bank Stadium. The golden rosette ultimately went to the Rolex Grand Prix winner of 2016: Philipp Weishaupt (GER). This time he had saddled the ten-year-old gelding “Coby“, whom Weishaupt already steered to victory last year at the CHIO Aachen. “Coby” loves it here in Aachen. Whether the dressage arena or the jumping stadium,” his rider said with a grin. One could tell in the jump-off how much “Coby” loves Aachen. He flew round the course with Weishaupt in 37.67 seconds. His fellow competitors weren’t able to top his time.

Eric Lamaze (CAN) came the closest with “Chacco Kid”. The pair crossed the finish line in 39.39 seconds, which secured them second place. Laura Kraut (USA) and “Confu” were just a few fractions of a second slower (39.57 seconds). And after his victory in the opening jumping competition, Richard Vogel (GER) had reason to celebrate once again: His time of 39.58 seconds sufficed for fourth place. 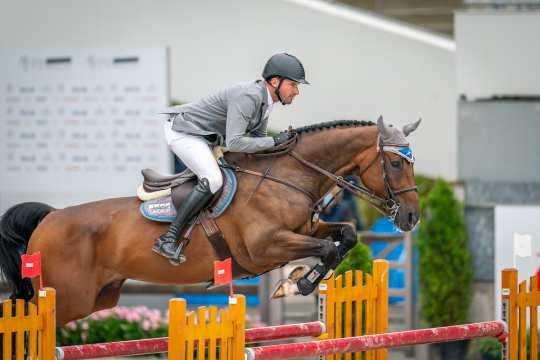