Philipp sat on the just seven-year-old Hatrona for the first time last Sunday. Today, the pair won the second qualifier for the Sparkassen-Youngsters-Cup. A victory for which the horse had earned the applause much more than himself, said Weishaupt afterwards.

It is unusual for a seven-year-old horse to leave his eight-year-old colleagues trailing behind him in a youngster class. It is even more unusual when the horse and rider haven’t even known each other for a week. But that was precisely the case with Philipp Weishaupt and the KWPN mare Hatrona by Eldorado van de Zeshoek. Weishaupt was qualified to compete in Aachen, but he didn’t have a horse for the Sparkassen-Youngsters-Cup. Then, he met up with his friend, Holger Wenz, last Saturday, who said: “I have got a super horse for you, one for the Youngsters Tour in Aachen!” Weißhaupt wasted no time, the very next day he had already saddled Hatrona. Two days later the two of them galloped into the expansive stadium of the Soers and left it on a score of four faults. The result of his second ride today: The victory after having crossed the finish line clear in the fastest time. Philipp Weishaupt: “I didn’t contribute that much to this win! Hatrona is a super horse – careful, scopey, fast and easy to ride. All the right ingredients!” The mare now has the chance to prove this once again on Saturday in the Final of the Sparkassen-Youngsters-Cup.

Hatrona wasn’t the only seven-year-old in the class, who outperformed her older colleagues. Second place also went to the KWPN-bred H.Big Action by Action Breaker, who was born in 2012 too. He was ridden by the Brazilian rider, Eduardo Menezes.

Gerrit Nieberg from Germany and the Westphalian-bred Ben by Sylvain claimed third place. Since the pair also finished fourth on Tuesday, the duo from Münsterland are the most successful pair in the Sparkassen-Youngsters Cup 2019 so far.

In total, eight German pairs will be competing in the Final of the Sparkassen-Youngsters-Cup on Saturday evening, in addition to Nieberg with Ben and Weishaupt with Hatrona they are Patrick Stühlmeyer with For Laubry, Marcus Ehning with Priam du Roset, Christian Kukuk with Mumbai, Maurice Tebbel with Can Ya Mecan, Christian Ahlmann with Mandato ven de Neerheide and Felix Haßmann with the horse that won silver at the World Championships of the Young Horses in 2017, Quiwitino WZ. 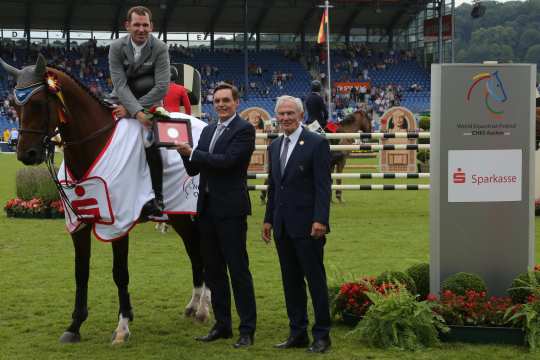