It seems that British dressage riders, whose forenames are Charlotte, seem to be guaranteed to obtain scores of 80 percent upwards in the dressage arena. First there was Charlotte Dujardin, now it is Charlotte Fry. Today, she claimed the victory in the Intermédiaire I, the WOTAX-Prize with her World Champion, Glamourdale.

The judges awarded Charlotte Fry with the just eight-year-old KWPN stallion, Glamourdale, 80.412 percent, whom she won the World Champion of the Young Horses with last year. They gave the pair tens for the extended canter and for the seat and influence of the rider, who explained: “He simply loves presenting himself and was totally by me every step of the way. I thoroughly enjoyed it!” What is better representing Great Britain in the Nations Cup at Aachen or riding to victory with Glamourdale? “I really can’t say, both are incredible!”

The pairs that finished second and third were also delighted with their results. As in the Prix St. Georges, the Dutch rider, Joyce Heuitink, came second with the eight-year-old Apache son, Gaudi Vita, this time on a score of 73.265 percent.

Third place went to the Hubertus Schmidt with a horse that can only be described as a high-achiever: the just seven-year-old Denoix. Schmidt has been riding the Oldenburg-bred Destano son since he was five. He has hardly competed. Schmidt’s professional rider, Katharina Hemmer, competed him twice in medium dressage competitions for young horses, just to see how he behaved at shows. He won both. Then, he was allowed to mature in peace at home. Denoix took part in his first advanced level dressage competition in April, directly at the international show in Hagen. He came second in the first competition and won the Intermédiaire I. And today he picked up the white ribbon in the Deutsche Bank Stadium with an overall score of 71,794 percent. 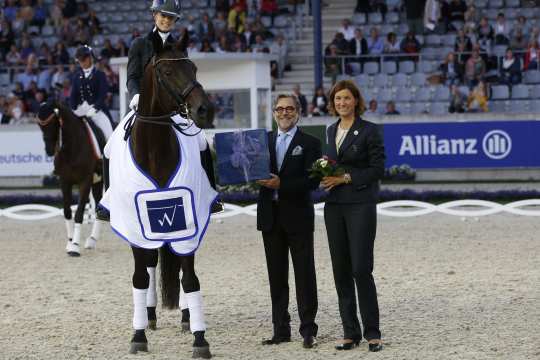 Horst Wollgarten, CEO of the "WOTAX Steuerberatungs- und Wirtschaftsprüfungsgesellschaft mbH", and Stefanie Peters, member of the ALRV advisory board, congratulate the winner.