Oranje drivers excel in the Prize of the schwartz GmbH

There is no way past the Dutch team at the CHIO Aachen 2018. The four-in-hand drivers from the neighbouring country claimed all three top places in the Marathon competition, the Prize of the schwartz GmbH today and are still in the lead in the Nations Cup.

Koos de Ronde is a strong Marathon driver and he did his reputation justice today by finishing on a score of 110.77 minus points. Second and third place went to the father/son duo Bram and Ijsbrand Chardon. Whereby achieving a score of 113.54 minus points, the junior beat his father again. Ijsbrand Chardon’s score was 114.98 minus points. Yesterday, after his victory in the obstacle driving competition, Bram Chardon had explained that he was well-prepared for the challenges of today’s Marathon competition in Aachen – the first in his life. He certainly had promised too much there.

In the overall classification of the Prize of the Richard Talbot Family, Boyd Exell is still in the lead with his broken ankle. He wasn’t quite as quick in the Marathon as usual, but nevertheless succeeded in coming seventh. As to whether he was in pain, he answered: “You don’t feel pain in the Marathon!” Only the tough carries belong on the carriages!

Today’s Marathon of the Prize of the schwartz GmbH was not only a challenge for somebody with a broken foot! Mid-summer temperatures demanded excellent condition and there were so many spectators on the track this morning that for the first time ever ticket sales had to be stopped. The drivers are in agreement here: Aachen is in a class of its own! The many spectators makes it more difficult for the horses to concentrate. As Michael Brauchle put it, whose team was handicapped by injuries: “It doesn’t suffice in Aachen to drive 80 percent. One has to give 100 percent here!” 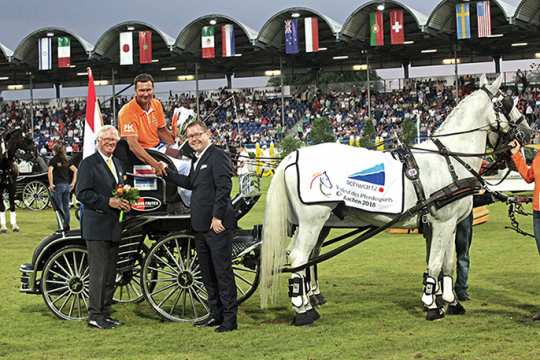